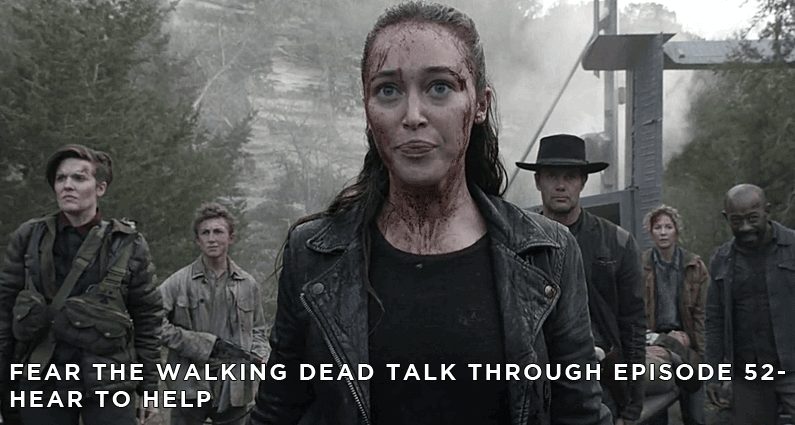 Talking Through Here to Help

The rest of this blog post requires a SPOILER WARNING!!! If you haven’t watched this week’s episode, then you should probably stop reading now.

We are back, and we’re here to help you talk through Fear!

We were fairly critical of many of the decisions made by the showrunners last season, particularly Madison’s death, and we had all sorts of problems with the second half storyline, to the point where I wasn’t sure I’d want to come back and podcast about the show. However, with the promise of helping people as a story in Season 5, and a really good trailer, we decided to continue on podcasting about Fear the Walking Dead!

Where’d they get the plane?

We see how far they would go to try to help people. They get a plane. Now, do we understand that Althea (and possibly Strand) are pilots, or did they read a book or play a flying simulator to prepare for the journey? That wasn’t very clear; and where exactly did they get that plane? How did they get fuel for the plane? Who knows. Maybe they will explain it next week. That said, it seems REALLY risky to fly a plane in the apocalypse, especially if you aren’t an experienced pilot.

Why is it so hard to help people?

One thing I had a hard time resolving is why they had such a hard time find people that needed their help. Helping a big group? Sure, maybe I can buy that, but I had a problem believing they hadn’t picked up any individuals to join up with them. Surely, after a few months, they would have had to run into someone, but they hadn’t.

Is Logan a bad guy?

I am really torn about Logan. If the denim plant is really his, then why shouldn’t he be able to take it back? It’s pretty clear it wasn’t a con job to me. He knew the combination and too much about the plant to think it could be anything other than what he said. Maybe in the zombie apocalypse, property and deeds don’t matter anymore, but I can’t really blame him for doing what he’s done, especially since he did it without any bloodshed. That said, why did it take him so long to claim what’s his? Did he have to send them so far away that they needed a plane to get there?

She is not my favorite character, and a lot of people agree with me. I was surprised to see her start the season injured again. They had a great opportunity to kill off her character, so I hope they have something planned for her this season that will be worth it. To me, I had to wonder why they would injure her again. Why not someone else?

I have to admit, I missed the symbols reference. It was only the mention on Talking Dead that alerted me to it. In case you missed it, too, those circle symbols on the paperwork were also on the helicopter that saved Rick, so they may be tied to the movies. It has to be. That walker had wires attached, and they tasered Althea, and then there’s all that radiation. I don’t know where this story is going, but it seems to be going somewhere.

That’s it for Here to Help!

We all thought Here to Help was a good episode, but not a great one. There were some headscratchers and some good moments. We’ll see where things go forward. Please leave your feedback for Fear the Walking Dead, Season 5 Episode 2, which is titled The Hurt That Will Happen, by 6 PM Eastern/5 PM Central on Tuesday, June 11, 2019. Check the Facebook group for any deadline changes. The best way to do that is via the Facebook group.

Other Fun Stuff Completely Unrelated to Here to Help!

Sign up to our Facebook group to make it easier to contribute feedback and interact with us and other listeners! If you want to help pay for the editing of this and other podcasts, I mentioned a while back that you can donate credits to Kyle’s Auphonic account, which he uses to make these episodes sound so good! That link is https://auphonic.com/donate_credits?user=kt1ao. Please remember to subscribe to us on Apple Podcasts. Subscribing to us helps us move up in the rankings, so it’ll help us out tremendously! You’ll also get new episodes when they’re released. And while you’re in there, leave us a rating or review! It only takes a few minutes and it helps others to find us!