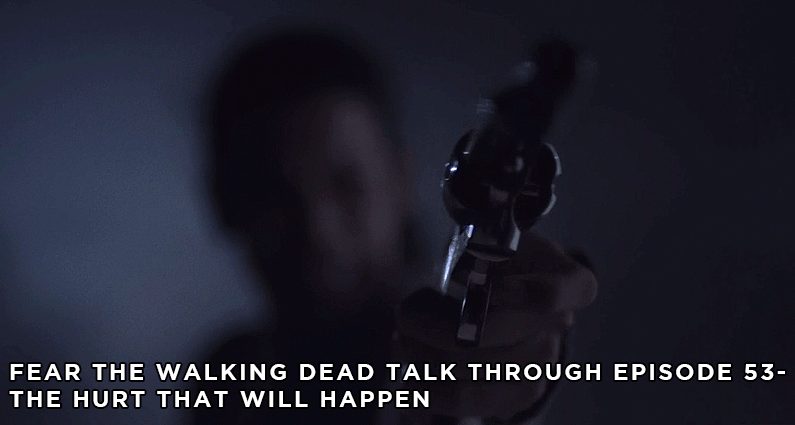 Talking Through The Hurt That Will Happen

We have more feedback for last week’s episode… S5E2 coverage starts at 31:15…

Strand leaves to see if he can get a plane from Daniel, who we see is living in a compound near El Paso. Some were a little confused about why Strand went alone, myself included. If he was worried he would be shot for his trouble, why not bring someone with him, like Charlie? Daniel’s not going to shoot a girl, but he goes alone, and he doesn’t take the SWAT truck. Daniel welcomes him inside but doesn’t give him the plane. There was a mixed response over Daniel’s return to the show. People who haven’t watched all of the first four seasons had trouble understanding the complicated relationship between Strand and Daniel, but if you have been watching, you got it.

We see something new this episode: Radioactive walkers. You can’t kill them in close combat – you can only shoot them. This is a little confusing to the viewer. I don’t exactly understand why a simple touch could kill you, but OK.

They continue to struggle with what to do with Luciana. The accordion talk just didn’t work. With the injury she has, you would think she would have been given some strong painkillers that would have made her slur her speech, but she instead makes some crazy talk about accordions. Now, as mentioned on the podcast, I have heard of people losing their filters after a heavy medication, but I would have expected her to slur her speech, act slow and be groggy. We saw none of that them. Lara said it and I think she got it right. The biggest problem is, once they got rid of Nick, the showrunners don’t seem to know what to do with her character. I appreciate the attempt at humor, but it seems a combination of bad writing, bad directing and strange acting choices (which may or may not be Danay Garcia’s fault) took the character off in a strange direction. I think they need to try something else.

This week, FTWD ratings were lower from last week, as expected, but not drastically so. S5E2 The Hurt That Will Happen got a 0.51 in the 18-49 demographic with 1.687 million viewers, down from the last week‘s 0.59 and 1.966 million viewers. As mentioned last week, there was no Talking Dead this week.

That’s it for The Hurt That Will Happen!

We all thought Here to The Hurt That Will Happen was a good episode, but not a great one, much like last week. Please leave your feedback for Fear the Walking Dead, Season 5 Episode 3, which is titled Humbug’s Gulch, by 6 PM Eastern/5 PM Central on Tuesday, June 18, 2019. Check the Facebook group for any deadline changes. The best way to submit your feedback is on the Facebook group.

Other Fun Stuff Completely Unrelated to The Hurt That Will Happen!

Sign up to our Facebook group to make it easier to contribute feedback and interact with us and other listeners! If you want to help pay for the editing of this and other podcasts, I mentioned a while back that you can donate credits to my Auphonic account, which I use to make these episodes sound so good! That link is https://auphonic.com/donate_credits?user=kt1ao. Please remember to subscribe to us on Apple Podcasts. Subscribing to us helps us move up in the rankings, so it’ll help us out tremendously! You’ll also get new episodes when they’re released. And while you’re in there, leave us a rating or review! It only takes a few minutes and it helps others to find us!