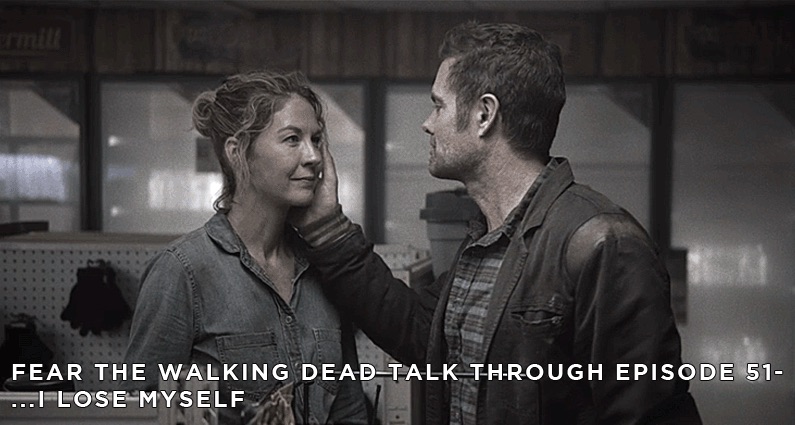 Talking Through …I Lose Myself

On this episode 51 of Fear the Walking Dead Talk Through, Kyle, Mark, and I talk through Fear the Walking Dead Season 4 Episode 16, the season finale, which is titled …I Lose Myself. It was written by executive producers/showrunners Andrew Chambliss and Ian Goldberg and directed by Michael E. Satrazemis. This episode had some good parts to it, but the story holes were deep and vast! Great characters, actors, visuals and camera work, but bad writing! Compared to last season, this finale was nowhere near as good as last season’s finale. Next week, we come back as The Walking Dead Talk Through!

Ratings were up for the finale…

Please leave your feedback for The Walking Dead, Season 9 Episode 1, titled “A New Beginning“, by 6 PM Eastern/5 PM Central on Tuesday, October 9, 2018. The best way to submit feedback is on our Facebook group.

Other Fun Stuff Completely Unrelated to …I Lose Myself!

If you want to help pay for the editing of this and other podcasts, I mentioned a while back that you can donate credits to my Auphonic account, which I use to make these episodes sound so good! That link is https://auphonic.com/donate_credits?user=bmeloche.

Please remember to subscribe to us on Apple Podcasts. Subscribing to us helps us move up in the rankings, so it’ll help us out tremendously! You’ll also get new episodes when they’re released. And while you’re in there, leave us a rating or review! It only takes a few minutes and it helps others to find us!