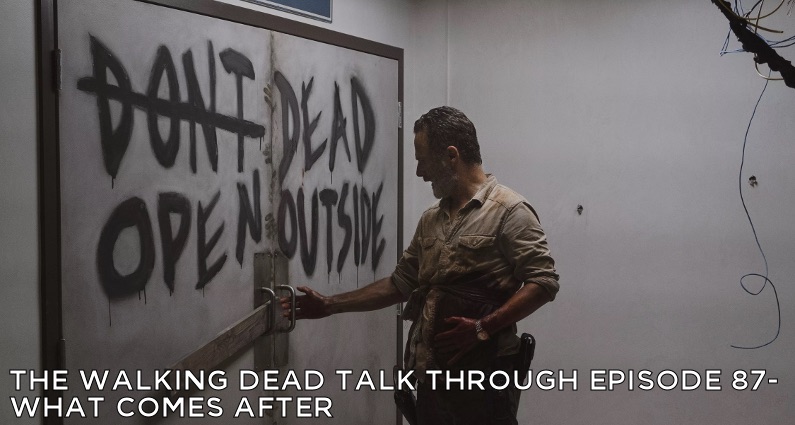 The Walking Dead Talk Through
TWDTT 087 - What Comes After (S9E5)

Talking Through What Comes After!!!

On this (longest ever) episode 87 of The Walking Dead Talk Through, Mark and I are joined by Mark’s co-host on Panels to Pixels, Steve, as we talk through The Walking Dead Season 9 Episode 5, which is titled What Comes After. The teleplay was written by co-executive producer Matthew Negrete, based on a story by TWD Chief Creative Officer Scott M. Gimple & Matthew Negrete, and directed by executive producer Greg Nicotero. We all loved this episode, though we also admit that it has some faults.

Visitations from departed friends… and one soon to be

A good portion of this episode is seen in hallucinations. Thankfully, we see three people he needs to see. The scene with Shane was priceless. Jon Bernthal was so good in this show in the first two seasons, and seeing Rick and Shane together again, even if only for a short minute, was great. The next hallucination was Hershel, played by the late Scott Wilson. This one really made me cry, both in the joy of seeing Hershel again, and sorrow over Scott Wilson’s recent passing in real life. The third was Sasha. You could argue that Sasha’s character was the only one that probably wasn’t the first choice, but seeing Sonequa Martin-Green’s character again probably hit me the hardest of all. I think that was mostly due to me being attached to because of her portrayal of Michael Burnham on Star Trek: Discovery. One could argue that one should have been Glenn, Abraham, or even Carl, but I think Sasha worked nonetheless. The last vision is with Michonne. I said soon to be, not because she is leaving, too, but because Rick is leaving, and Michonne will lose her partner.

Maggie reaches Alexandria, intent on killing Negan, but Michonne stops her. I thought this would be a standoff between them, but Maggie ultimately convinces Michonne to let her see Negan, despite knowing what would probably happen as a result. Maggie ultimately decides not to kill him, as that would give him the release he does not deserve.

How is he not dead?

Rick was bleeding throughout the episode, yet does not succumb to his injuries. The bridge explodes, and it seems that Rick somehow escapes without a scratch? How did that happen? He somehow survives both his rebar injury and the explosion and is taken via helicopter to who knows where.

We still don’t know what an A or a B is, but we do know that Rick is a B. I guess we may not know more until the first TWD movie comes out.

Walking Dead: The Next Generation?

In the final scene, we see that there’s been another time jump, as a new group of survivors being surrounded by walkers, only to be rescued by the 10-year-old Judith Grimes! This looks interesting, and we’ll see where the story goes from here!

As expected, ratings are up…

As you can see from these rating and viewer charts, created by me, you’ll see that ratings were up again, with 2.07 in the 18-49 demographic, slightly above the 1.95 from last week, and 5.414 million viewers, slightly up from 5.095 million last week. What ratings will do after this episode is anyone’s guess. They could go up again, or take another nosedive. Only time will tell.

Please leave your feedback for The Walking Dead, Season 9 Episode 6, titled Who Are You Now?, by 6 PM Eastern/5 PM Central on Tuesday, November 13, 2018. Check the Facebook group for any deadline changes.

Other Fun Stuff Completely Unrelated to What Comes After!!!