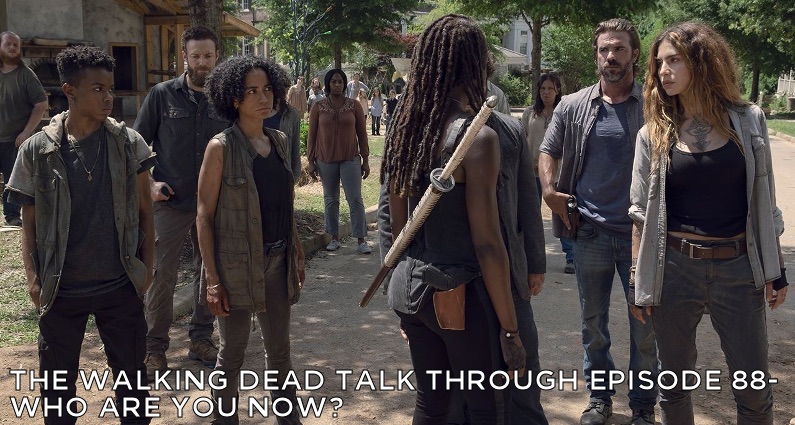 Talking Through Who Are You Now?

On this episode 88 of The Walking Dead Talk Through, Mark and I discuss The Walking Dead Season 9 Episode 6, which is titled Who Are You Now? This was written by Eddie Guzelian, and directed by Larry Teng.

Did you notice changes in the credits?

Speaking of the credits, there’s nothing specifically mentioned in the story about Maggie, but we know some things happened after the last episode. We can only assume that she’s not the person leading the Hilltop, but we cannot say who is, except that whoever is leading is a woman. I personally hope they fill in the gaps as far as where Maggie is and what happened to her in the next episode.

We see Michonne has a big scar on her back in the form of the letter X and might have been a branding scar, and we’d love a flashback to see what happened there. Various other people have new scars, hairstyles, and even personality changes. Gabriel and Rosita are a thing???

Eugene’s now a badass and grew out his hair??? We also see some of the Saviors are now living in Alexandria. Others are marauders, as Carol and Henry discover. Carol shows once again that if you underestimate her, you might get burned! Rimshot!!! Daryl is living alone… and seems lost. Michonne’s in Alexandria, but she’s also lost, and talking to Rick. It is really sad, and I started to cry… and stopped in my tracks when I realized he’s not dead or at least wasn’t dead when they thought he died six years before. That undermines the emotional underpinnings of the story, but not fatally. This was a great episode in what’s been the best season since Season 5 or 6.

We see the walkers behaving in ways we’ve never seen before, including talking. Are they evolving, or is something else at hand? Well, we think this is not what it seems, but time will tell.

Ratings are about even from last week…

Please leave your feedback for The Walking Dead, Season 9 Episode 7, titled Stradivarius, by 6 PM Eastern/5 PM Central on Tuesday, November 20, 2018. Check the Facebook group for any deadline changes, and that’s one of the best ways you can leave feedback!

Other Fun Stuff Completely Unrelated to Who Are You Now?