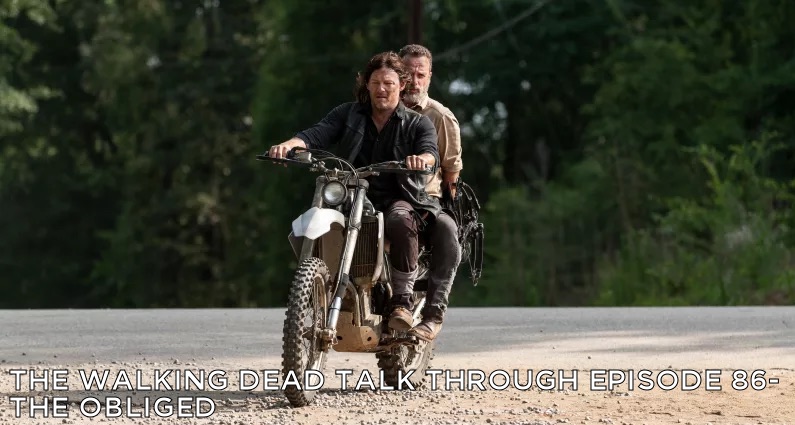 The Walking Dead Talk Through
TWDTT 086 - The Obliged (S9E4)

Talking Through The Obliged!!!

On this episode 86 of The Walking Dead Talk Through, Mark and I talk through The Walking Dead Season 9 Episode 4, which is titled The Obliged. It was written by Geraldine Inoa, and this is her first IMDB credit, and directed by Rosemary Rodriguez. We both loved this one and are still happy with the direction the show is going this season. Except…

NO!!!! Only one episode left for our favorite character!!!

It’s hard to believe, but next episode, we’ll be discussing the final episode of Rick Grimes!!! I am really not looking forward to saying goodbye to my favorite character. I know I would have been really, really upset if they had killed off his character out of the blue, much like how I was upset with a couple of deaths in Fear the Walking Dead Season 4. That said, Rick Grimes IS The Walking Dead, much more than Madison or Nick WERE Fear, so Rick’s death, assuming he dies, will be much more traumatic, even knowing about it.

It seems like Maggie is going to Alexandria to kill Negan. Will she succeed, and next week is a big fake out??? Is she going to decide not to kill him after she sees him? Will Michonne stop her? We know that this episode will focus on Rick, so we may not ultimately see what happens here, but I think we will see something, even if not a lot.

So, Negan’s got a fixation with Lucille, doesn’t he? He tries to make it sound like they are the same, but we know that is not the case. It was all just to get his bat Lucille. So where is that bat anyway? Do you believe her that they just left it out there, probably by that tree with the stained glass, or do they have it somewhere? To me, I hope they just threw it in a river or buried, or even burned it. I don’t want him to ever get that bat back. I liked how Michonne needs to get her “workout” by killing walkers at night. To me, that’s a job that’s never done, and I think that’s healthy for her to do.

Falling into a Hole…

There was some good drama between Rick and Daryl. Major kudos go to Angela Kang and how much of an improvement we’ve gotten in Daryl’s character since she took the reigns from the Gimple! Still, the whole sinkhole was a bit contrived. Are we to believe that no walkers fell into it until then? I don’t buy it. It was a minor contrivance in an otherwise good episode.

Again, with the Rube Goldberg walker contraptions? What’s the point? So, do you think that she’s gone with the helicopter, or is she still around? What’s an A? If she’s not bringing back Gabriel as an A, who will she take as her A? Could she take an injured Rick? Negan? Maggie? Someone else? What’s a B?

Ratings are slightly up…

As you can see from these rating and viewer charts, created by me, you’ll see that ratings were up a little bit, with 1.95 in the 18-49 demographic, slightly above the 1.93 from last week, and 5.095 million viewers, slightly up from 5.037 million last week. Ratings should go up the next episodes, for Rick’s last episode, and the World Series is over now.

Leave us your feedback for the big Rick episode!

Please leave your feedback for The Walking Dead, Season 9 Episode 5, titled What Comes After, by 6 PM Eastern/5 PM Central on Tuesday, November 6, 2018. Check the Facebook group for any deadline changes.

Other Fun Stuff Completely Unrelated to The Obliged!!!

To help pay for the editing of this and other podcasts, I mentioned a while back that you can donate credits to my Auphonic account, which I use to make these episodes sound so good! That link is https://auphonic.com/donate_credits?user=bmeloche. Please remember to subscribe to us on Apple Podcasts. Subscribing to us helps us move up in the rankings, so it’ll help us out tremendously! You’ll also get new episodes when they’re released. And while you’re in there, leave us a rating or review! It only takes a few minutes and it helps others to find us!