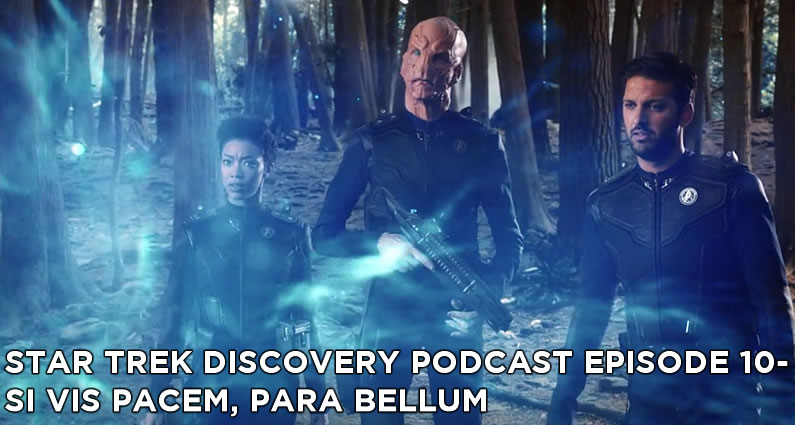 This episode does a deeper (but in my opinion, not deep enough) dive into Saru and his species. For a prey species, Kelpiens are faster, stronger, have better senses and taller than humans. He can crush communicators with his bare hands. Can you imagine what the apex predator species that considers the Kelpiens prey? For the first time in his life, Saru felt no fear on the planet. His actions, however, showed questionable judgment. His actions on the planet were nothing short of mutiny, though I doubt he will be reprimanded for it.

According to the Wikipedia article, Si Vis Pacem, Para Bellum means “If you want peace, prepare for war”.

So what did we think of Si Vis Pacem, Para Bellum?

It was very much a split vote for this episode. Adam thought it was the best episode so far, but I had the opposite reaction. I would probably rank this one as my least favorite so far. I had a hard time figuring out why I had that impression, but I finally identified one key issue: The episode length. It started with a bang but, in my opinion, it tailed off from there. Mind you, it seemed well written, well-acted, well-directed and the effects (with the exception of the naturally occurring transmitter) excellent. The problem that I see is that there was enough potential story there to fit into two episodes, but the episode was not only edited down to a single episode, but this was the shortest episode so far. It seemed like a lot of the story on the planet had been edited out, as did the story on the Klingon sarcophagus ship. It’s possible that some of the Klingon plot could have been moved to next week’s mid-season finale, and it’ll fit well once that’s been released, but the episode could have benefited from more time to expand the story.

That’s one thing that wasn’t clear but we both think that she did not die. We should be seeing her again next episode.

Speaking of next episode…

Please leave your feedback for the mid-season finale, Season 1 Episode 9, titled Into the Forest I Go, by 6 PM Eastern/5 PM Central on Tuesday, August 21, 2018. One of the best ways to submit feedback is on our Facebook group.