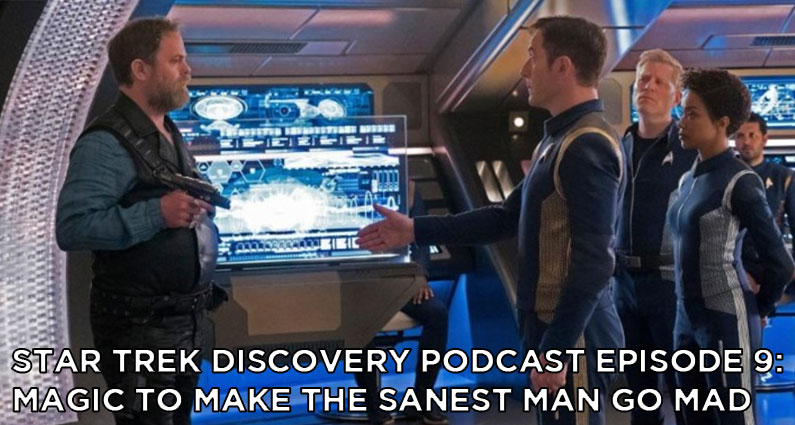 On this episode of The Star Trek Discovery Podcast, Adam and I discuss Season 1 Episode 7, titled Magic to Make the Sanest Man Go Mad. This episode marks the return of another TOS figure, Harry Mudd.

Man, Mudd can hold a grudge, can’t he?

In this episode, we see the Discovery in a 30-minute time loop. This is a Trek trope. We’ve seen a similar thing in other episodes of Star Trek, the most notable being the classic TNG Season 5 episode, “Cause and Effect”. Unlike that episode, we see a time loop created intentionally, with Mudd and Stamets, who still seems a bit acid trippy this episode :-), retaining the awareness of what happened in previous time loops. Mudd, he sure can hold a grudge!!! It’s stated at one point that Mudd killed Lorca 53 times, and I think he kills him a few more! Also unlike the TNG episode, we see them not get repetitious. We seem to some of the loops, while others are mentioned in passing, and others we don’t see. I think we see the first loop, but then many more loops happen before the next one. This continues on.

I didn’t say too much about this during the episode, but I was a little disappointed with Stella. She seemed a lot nicer, younger and better looking than the Stella-bot we see in TOS. It didn’t seem too much of a punishment for Mudd, and certainly not what he deserved for what he had done. I thought it led to a weak ending. The writers also seemed to make the characters a little too aware in the last couple of loops, and I thought it was a big stretch that Stamets could have conveyed everything going on to each major character in a believable way. However, on a second watch, both elements bothered me a lot less, and I just enjoyed it for what it was.

What is the magic to make the sanest man go mad?

I didn’t mention this on the podcast since I screwed up the meaning of the episode with the next one (cue TOS Incorrect! sound effect!!!), but the title of this episode comes from Homer’s The Iliad. Here’s the quote: “…There is the heat of Love, the pulsing rush of Longing, the lover’s whisper, irresistible—magic to make the sanest man go mad.”

So Star Trek: Discovery earned a bit of those Disco shirts, featuring Wyclef Jean’s re-sampling of The BeeGees’ Staying Alive, which probably is the cornerstone of disco music. And you can buy your own Disco shirt now!!! 🙁 Oh well, I had hoped we’d see an end to that, but I guess not. In summary, we both thought this was a fun episode to watch, even with its flaws, and can’t wait for next week! Send in your feedback!