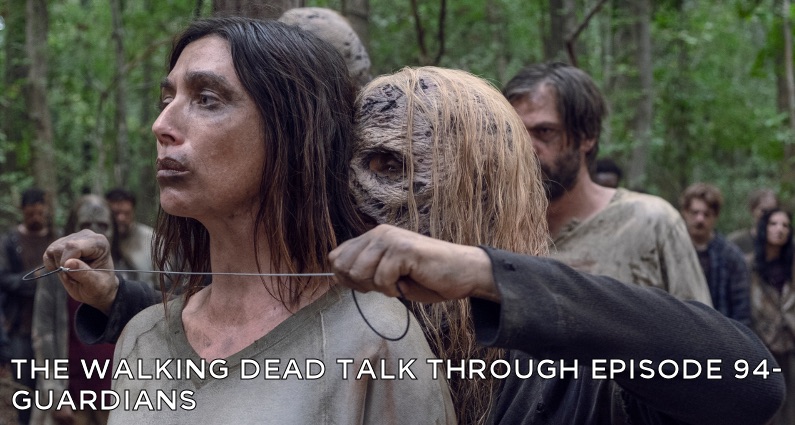 On this episode 94 of The Walking Dead Talk Through, Mark and I talk through The Walking Dead Season 9 Episode 12, which is titled, Guardians. This was written by LaToya Morgan, and directed by Michael E. Satrazemis.

A look at The Whisperers

We spend a lot of this episode with The Whisperers. Life with them seems to be animalistic and brutal. It’s not a way of life I would like to live. It’s a very survival of the fittest, and when Alpha is challenged, she attacks with a brutality that may even go beyond Negan’s. That said, I really have an issue with the ability to behead someone with just razor or piano wire (it definitely wasn’t a yo-yo).

I could definitely see being able to kill someone with a wire, but beheading someone??? I just don’t buy it. Scary and effective, but it’s one of those scenes where you love it when you first see it, it’s shocking and terrifying, but if you watch it again or even think about it, it seems impossible.

The scene where Alpha tries to get Lydia to kill Henry was pretty scary. Alpha proved more that she is a psycho from long before the apocalypse, with the story of Lydia almost suffocating to death when she was a child and just watching her die, only to fall away from the plastic that was suffocating her. How did this mom react? She reacted in the way that only a psycho would react, by hitting Lydia hard. I did have a not-so-nice thing to say about Alpha, but I’ll save it for the listeners.

Also scary this week is Beta, who appears for the first time. I think he’s scary in another way, in terms of physical presence and being pretty cold. I think he’s going to also be an interesting villain. It was a great rescue by Daryl and Connie by attacking with the walkers, but I didn’t buy that these “Guardians”, as they call them, would be able to attack like that and catch the Whisperers off guard as much as they did. I called BS.

Negan gets to Michonne

We get a longer glimpse at Alexandria this episode. We see a council that is frustrated at the power Michonne has to veto anything for security concerns. I think Michonne has probably vetoed too much, at the expense of distancing them from the other groups. The council really wants to participate at the fair, to help The Kingdom (or is it Kingdom?). Unfortunately, Negan offers counsel to Michonne at a time when it’s least advantageous. It wasn’t what he said, but how he says it that makes Michonne overcompensate in this episode, as well as knowing that Judith has been talking to Negan. Michonne overcompensates and gives into the council at a time when it may be the worst time. I worry that they’ll come to the fair, and there will be an attack by the Whisperers and many from Alexandria will die, probably in the season finale.

A love triangle, or parallelogram?

We see Gabriel having to deal with the news of Rosita’s pregnancy by Siddiq. Eugene really put Rosita’s feelings ahead of his own and does the right thing by counseling the pastor to stay with her. I thought this showed a lot of growth in Eugene, and it was nice to see. Whether it’s a love triangle, rhombus, parallelogram or square, we don’t know yet, but I thought that was a nice story to see. Hopefully, we see the beginnings of a new family unit that will survive for some time to come, but it seems doomed…

We like to correct ourselves when it happens. In the podcast, I mention when Alpha says to Lydia, “Kill the boy”, I thought of the Game of Thrones S5E5 Kill the Boy. I was a little less than specific on the details, and I said I’d look it up but I never did mention it on the podcast. It was Maester Aemon Targaryen that said it, and he was a member of The Night’s Watch. Also, Mark mentioned that RJ wasn’t in the episode. I don’t know where he appears, but the actor was credited in this episode.

Ratings are up again!

That’s it for Guardians!

We both enjoyed this episode, though we thought it was weak in a few areas. Please leave your feedback for The Walking Dead, Season 9 Episode 13, titled Chokepoint by 6 PM Eastern/5 PM Central on Wednesday, March 12, 2019. Check the Facebook group for any deadline changes. I may be taking the week off for this one again, but that hasn’t been finalized yet.