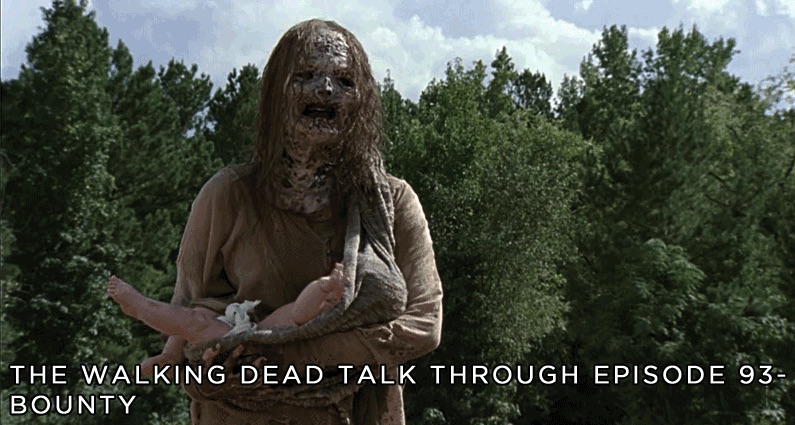 On this episode 93 of The Walking Dead Talk Through, Mark and special guest co-host Steve Brown from Panels to Pixels discuss The Walking Dead Season 9 Episode 11, which is titled Bounty. This was written by co-executive producer Matthew Negrete, and directed by Meera Menon. Thanks to Steve for subbing in for me this week! Don’t worry, you still hear from me this week, but through voicemail instead of hosting the episode. Despite me not being on the podcast this week, I thought the episode was great, and exactly what I needed after the last few episodes didn’t captivate me like I’m used to.

We saw Alden and Luke exchanged for Lydia. I know that many of them didn’t want to give up Lydia, but what could they do? They owe it to Alden and Luke while keeping Lydia would not make any sense, since Alden and Luke would have most certainly been killed.

We see the coldness of Alpha and The Whisperers, with them leaving a crying baby for the walkers. I know this was probably difficult to see for a lot of people, myself included. I think she was testing them to see if they’d care. I thought the scene with Connie rescuing the baby and then trying to thwart off the walkers in the sorghum field (looked like corn, but the behind the scenes video calling it a sorghum field) was tense and I was noticeably scared for Connie. Daryl comes to her rescue, but other Hilltop people were behind him, including Tammy Rose and Earl, who eventually take the baby, to raise, I assume.

Are we shipping Daryl and Connie?

I’ve heard a lot of people shipping those two. I, honestly, never thought of that at the time, until I heard it said on Talking Dead. Now, I can’t stop thinking about it. If that happens, it’s about time!

One of the best aspects of the episode was The Kingdom’s side trip, to retrieve a projector bulb, so they can watch movies again. This was fun, inspiring, and a ray of hope in an otherwise depressing story. I needed that hope after some pretty depressing elements of this post-Rick era. Ezekiel, Jerry, and, of course, Carol light up the screen.

Ratings are up and down from last week…

Mark will be hosting this coming week…