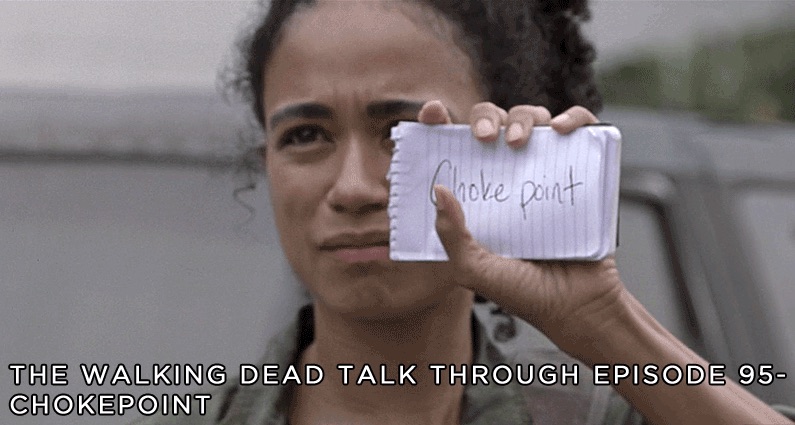 On this episode 95 of The Walking Dead Talk Through, Mark and special guest co-host Lara talk through The Walking Dead Season 9 Episode 13, which is titled, Chokepoint. This was written by Eddie Guzelian & David Leslie Johnson-McGoldrick, and directed by Liesl Tommy.

This episode features a big fight between Daryl and Beta, the Whisperers’ henchman and second in command. I thought it was a really good scene, but Mark was a bit underwhelmed.

A couple of new couples?

Some people are shipping Connie and Daryl. Will it be Donnie? Dannie? Darnie? Coryl? Conyl? I, for one, would like to see Daryl get a girlfriend, and they’d be cute together if they’d just take a bath. 🙂 It’s about time, but that’s yet to be seen. On the other hand, we see more puppy love going on between the hapless Henry and former Whisperer Lydia. I think it’s dangerous for Henry, but she’s cute and you can’t help who you fall in love with, especially in the apocalypse. Henry was less annoying for me this episode, although I was annoyed that he fell in the Cold Open.

When was the last time you have seen a movie?

The Kingdom is challenged for ransom, as a new group threatens to challenge the fair. There’s a standoff, but in a severe and welcome change of pace, Carol offers this new group, which actually wrote out a list of demands in proper English, a chance to see a movie in exchange for security for comers and goers to the fair. I thought this was brilliant.

That’s it for Chokepoint!

I enjoyed Chokepoint, although I’m not sure about Mark and Lara though! Thanks to Lara for subbing in for me this week! Please leave your feedback for The Walking Dead, Season 9 Episode 14, titled Scars by 6 PM Eastern/5 PM Central on Wednesday, March 19, 2019. Check the Facebook group for any deadline changes. I may be taking the week off again, but that hasn’t been finalized.