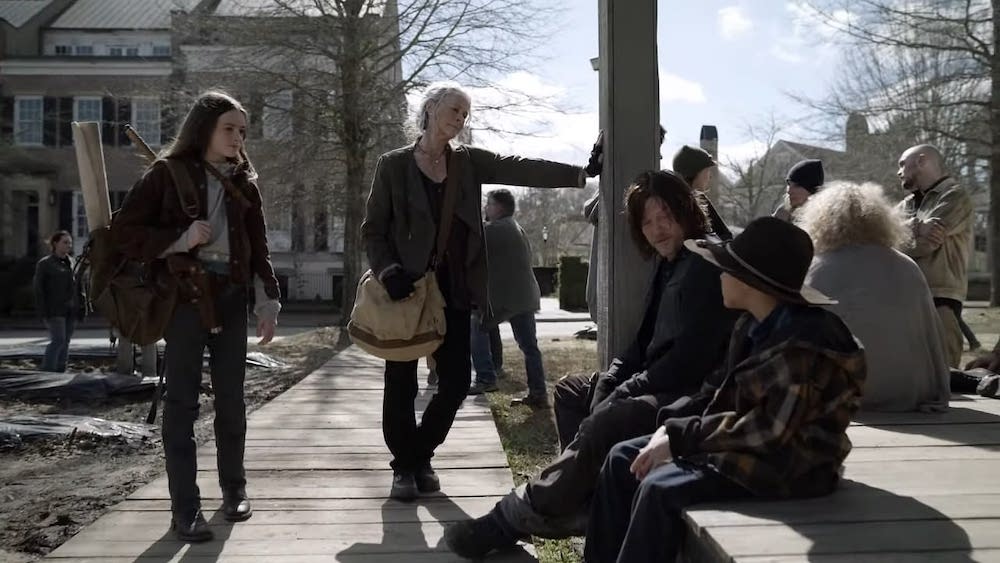 Pamela is headed for a beatdown, and she better!

For episode 151 of The Walking Dead Talk Through, Kyle, LT, and Brian talk through The Walking Dead Season 11, Episode 23, titled Family. Written by Magli Lozano & Erik Mountain & Kevin Deiboldt and directed by Sharat Raju. The Alexandrians and the prisoners head back to the Commonwealth to confront Pamela Milton. Meanwhile, a swarm approaches the city.

The Grimes curse strikes again, Pamela is on her last leg and shows just how much she feels about her citizen of The Commonwealth, and our people get in a variant-level sticky situation!

Hey Survivors! Here is the penultimate episode of The Walking Dead Series. Just one more to go, and after 12 years, our beloved show is ending. But not forever with all the spinoffs, and who knows what they will come up with (something better than Tales, lol). We have another explosive episode with Pamela showing more of her evilness that will not, I Say Will Not, be redeemable. The stormtroopers keep the streak of incompetence for a force that was believed to be feared… lol. And walkers that have more undead skills than we’ve ever been shown before since back to Season 1. And yes, the shocking cruse of the Grimes shows its ugly head again with a shot heard around the Walking Dead Universe. These poor Grimes children sure have some terrible luck. But Kyle is not too worried because he thinks there is some plot armor surrounding Judith Grimes, so he feels we will not see the end of her story.

So Enjoy as Kyle, LT, and Brian discuss the penultimate episode of the series. The Walking Dead, Season 11, Episode 23, titled Family.

Ratings got a bump up, and that is good!

That’s it for Family. For our next episode, we’ll be covering the Finale of The Walking Dead Series S11E24 titled Rest in Peace. We’d love it if you sent in your feedback. One of the best ways to submit feedback is on our Facebook group at https://facebook.com/groups/WalkingDeadTTM/. You can also send us an email to walkingdead@talkthroughmedia.com or call our new voicemail at 216-232-6146. The deadline for feedback will be 7 PM Eastern / 6 PM Central the Tuesday after the episode airs.