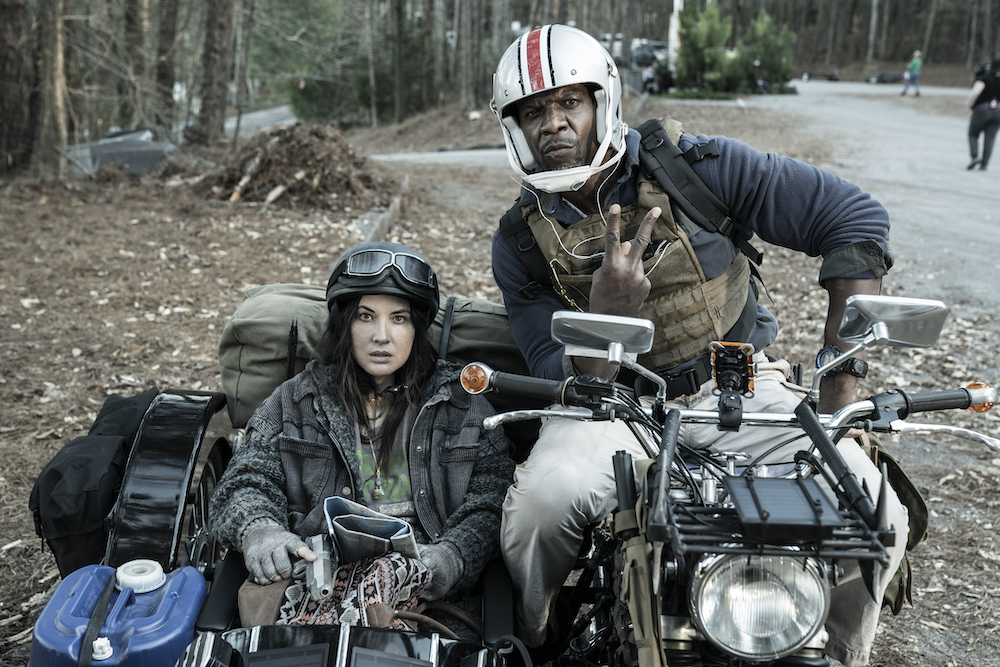 Sidecar ride with a hippie and a lonely jock.

For episode 141 of The Walking Dead Talk Through, Kyle and LT and a surprise visit from Brian, talk through the Series Premier of Tales of The Walking Dead Season 1, Episode 1 titled Evie/Joe. It was written by Maya Goldsmith and= Ben Sokolowski and directed by Ron Underwood. A prepper leaves his bunker, only to be saddled with a hippie who finagles her way on the ride.

Hey Survivors! We are back to cover the new series, Tales of The Walking Dead. This new series is starting pretty decent, and with five more to go, I hope it stays interesting and fun to watch. This episode had some good things but also some, how do we say it, unrealistic apocalyptic decision-making? Or something like that. Why do these people just leave completely functioning bunkers with tons of supplies to go off into the sunset with nothing but an unloaded gun and a goat? I get that the relationship between Evie and Joe was the point, but still, they could have shown them with backpacks full of gear, which would have made the point. Anyway, still, this was a refreshing return to The Walking Dead Universe for our viewing enjoyment.

Brian was able to pop in from time to time to share his thoughts, and hopefully, he will be able to join us again. If not, he will send in voicemail or written feedback, and we will cover it when we get it. So Enjoy as Kyle, LT, and Brian discuss Tales of The Walking Dead Season 1 Episode 1, Evie/Joe

That’s it for Evie/Joe. For our next episode, we’ll be covering Tales of The Walking Dead S1E2 titled Blair/Gina. We’d love it if you sent in your feedback. One of the best ways to submit feedback is on our Facebook group at https://facebook.com/groups/WalkingDeadTTM/. You can also send us an email to walkingdead@talkthroughmedia.com or call our new voicemail at 216-232-6146. The deadline for feedback will be 7 PM Eastern / 6 PM Central the Tuesday after the episode airs.