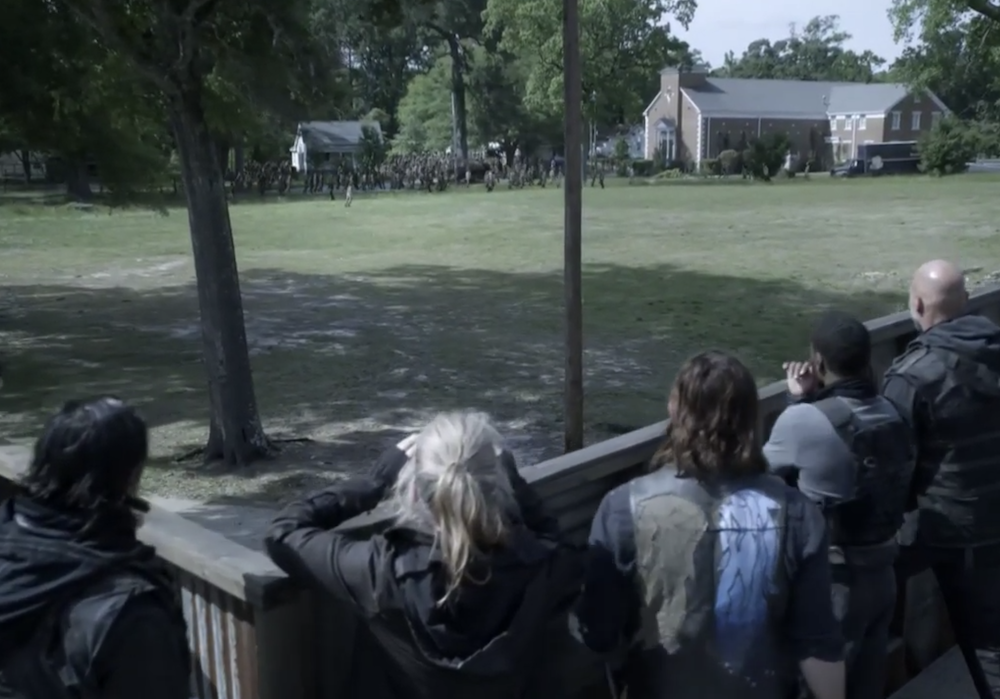 The Final Showdown between a Storm and the Pope..

For episode 131 of The Walking Dead Talk Through, Kyle, Brian, and LT talk through The Walking Dead Season 11 Episode 8 titled For Blood. It was written by Erik Mountain and directed by Sharat Raju.

Alexandia and the crew in a stormy peril and Maggie battles for Meridian .

The showdown between Maggie and the Reapers is finally here and was there some whispering butt-kicking that was had. Pope sure does have some tricks up his sleeve but Leah ended up being the final trickster. The Alexandrians face a brutal storm with walkers knocking down the doors but Rosita showed up in the end that she is still a walker killing machine.

There was a lot of talk about where the heck is Meridian where it was a calm night but somehow Alexandria was getting its butt kicked by a storm of the century. The Hwacha, that Brian enjoys saying that word, was a puzzling choice of a weapon of mass destruction, but I guess it does send off an ominous vibe. And we get into a longer than I thought, discussion of The World Beyond. Which is starting to hold its own compared to last year. It might be good. So enjoy as Kyle, Brian, and LT as well as all our wonderful listeners feedback discuss Season 11 Episode 8th For Blood.

That’s it For Blood. For our next episode, we’ll be covering the return of Fear the Walking Dead with the premiere of S7E1 titled The Beacon and The Walking Dead World Beyond S2E3, titled Exit Wounds. We’d love it if you sent in your feedback. One of the best ways to submit feedback is on our Facebook group at https://facebook.com/groups/WalkingDeadTTM/. You can also send us an email to walkingdead@talkthroughmedia.com or call our new voicemail at 216-232-6146. The deadline for feedback will be 7 PM Eastern / 6 PM Central the Tuesday after the episode airs.