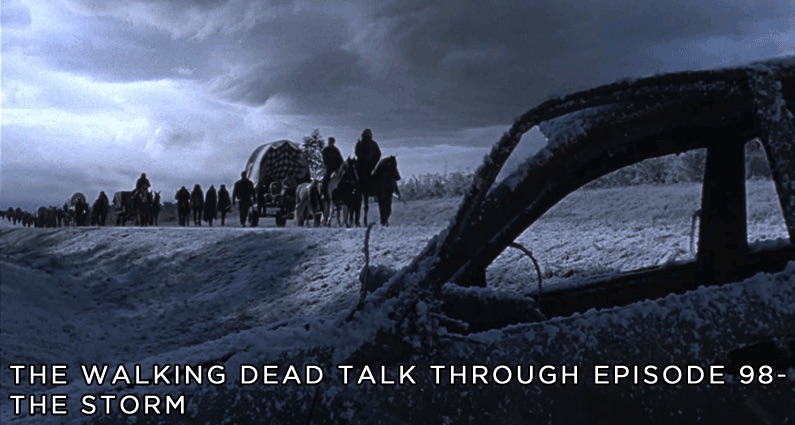 Talking Through The Storm

We talked through The Walking Dead Season 9 Episode 16, which is titled, The Storm. This week, guest host Alex joined Brian and Mark to discuss the season finale! The Storm was written by Angela Kang & Matthew Negrete, and was directed by Greg Nicotero.

The rest of this blog post requires a SPOILER WARNING!!! If you haven’t watched this week’s episode, then you should probably stop reading now.

Winter is coming? Forget that! Winter has come!

It’s taken nine seasons, but we finally got to see winter on The Walking Dead. Like birds, The Whisperers shambled south for the winter, so the enemy this week wasn’t Alpha, Beta and the rest of The Whisperers, but a big winter storm. Unfortunately, despite our anticipation about finally seeing the winter, it didn’t work for us. We all come from northern climates, and we’re used to snow. I have a hate/hate relationship with the snow since having a few close calls in winter storms over the years, so I am intimately aware of what a winter storm looks and feels like. This was not convincing to me at all. It looked OK for some of it, but when it counted, there were some things that just didn’t ring true.

There should have been a lot more snow on the ground. There were leaves on the trees and bushes – all the leaves should have fallen by that time. Some of the close-ups of the snow didn’t look realistic. Did you really need a caravan and a human chain to just walk from one house to another in Alexandria? The snow on the ground during the snowball fight, with RJ playing in it, looked like cotton balls, mothballs and styrofoam.

It felt like it was a snowstorm created by people who didn’t know what a snowstorm was actually like, only what they had seen on TV, movies, and photos. I appreciated what they tried to do, but the show would have been a lot better off doing a location shoot where there are actual winter conditions, such as Canada, Minnesota, or upstate New York. You know, a place with actual snow, cold enough for snow to fall and stay frozen. It seems like such a big effort to simulate snow when it would have made so much more sense to go to where there is actual snow. Other series do that. Why didn’t TWD? Game of Thrones has done great winter scenes. They should have emulated what they’ve done and gone on location.

And The Whisperers weren’t even there?

Yup, you got it. They were an afterthought this week. They went south, which made me shrug. Since they left the area, why would they even go back to Virginia in the spring? Why get into a conflict when they come back? Why not just stay in the south or go somewhere else? I just didn’t get that at all. It made no sense.

The King and Queen’s reign is over.

The Kingdom has fallen into disrepair and sorrow over the losses, and Ezekiel and Carol split over their grief. This was very sad. I hated seeing this happen. It’s very realistic. This often happens with grieving parents, but death is something that happens in the Zombocalypse, so I would have thought they’d be strong enough to weather it. They may come back together in Season 10, but this was a downer in an otherwise down episode. At least Jerry keeps his spirits. Kingtop it is Jerry!!!

Negan may not be unredeemable after all.

This may have been my favorite part of the episode. I loved the change in Negan, and him saving Judith. I also loved the scene with Michonne. A bad guy doesn’t think he’s a bad guy indeed. It really seems that little girl has opened him up to redemption.

Who was that on the radio?

As Gary asked in his feedback, this would have been much more effective had this been Rick, Maggie, Jadis, or even Alicia from Fear. For this to be an unrecognizable female voice (it could have been one of those women, or someone else, but you couldn’t tell because of the garbled reception) was a big let down in an episode that wouldn’t have been as bad if it had been a regular episode. For a finale, it just didn’t work. Some argued that Game of Thrones has had their big episode be the penultimate one every year, but this is TWD, and we’re used to a pattern where the big episode is the season finale. We expected that pattern to follow, but it didn’t this season, and that means we were disappointed with the result.

TWD Ratings are up! From last week, anyway.

That’s it for The Storm!

Other Fun Stuff Completely Unrelated to The Storm