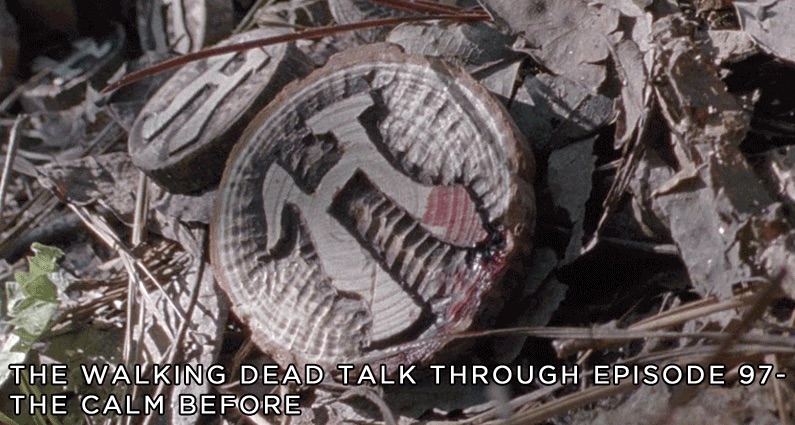 Talking Through The Calm Before

On this episode 97 of The Walking Dead Talk Through, Brian and special guest co-host Steve talk through The Walking Dead Season 9 Episode 15, which is titled, The Calm Before. This was written by Geraldine Inoa & Channing Powell, and directed by Laura Belsey. Mark was out sick this week.

It was quite the fair, and a chance for the communities to come together again. They finally signed the charter! That was a long time coming. I don’t know about you, but I was surprised that we didn’t see Cyndie as the leader of Oceanside, but Sydney Park landed a part on a new series. The actress who now plays her, Avianna Mynhier, looks just like an older version of the original actress, Mimi Kirkland.

To say it simply, the scene with our fallen comrades on a pike was disturbing and compelling. I was truly shocked by the death of Henry. I did not see that coming. I thought that character would be with us until the end of the show. Enid and especially Tara, on the other hand, should have gotten more appropriate deaths.

That link is A Death in The Limelight.

That’s it for The Calm Before!

We both enjoyed The Calm Before, as did Mark according to his feedback and thanks to Steve for coming on the podcast again this week! Please leave your feedback for The Walking Dead, Season 9 Episode 16, the season finale, titled The Storm, by 6 PM Eastern/5 PM Central on Wednesday, April 3, 2019. Check the Facebook group for any deadline changes. The best way to leave your feedback is via the Facebook group.

Other Fun Stuff Completely Unrelated to The Calm Before

Sign up to our Facebook group to make it easier to contribute feedback and interact with us and other listeners! If you want to help pay for the editing of this and other podcasts, I mentioned a while back that you can donate credits to my Auphonic account, which I use to make these episodes sound so good! That link is https://auphonic.com/donate_credits?user=bmeloche. Please remember to subscribe to us on Apple Podcasts. Subscribing to us helps us move up in the rankings, so it’ll help us out tremendously! You’ll also get new episodes when they’re released. And while you’re in there, leave us a rating or review! It only takes a few minutes and it helps others to find us! Have you checked out Amazon lately? That’s one way you can support this network and help keep the lights on!