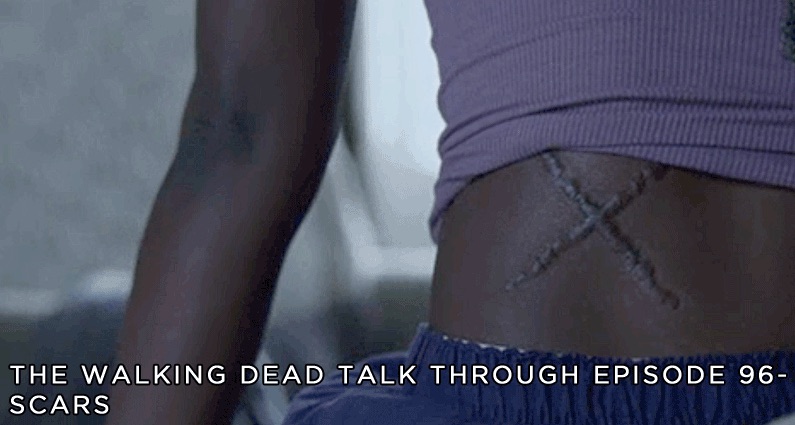 On this episode 96 of The Walking Dead Talk Through, Brian, Mark, and special guest co-host Steve from Panels to Pixels talk through The Walking Dead Season 9 Episode 14, which is titled, Scars. This was written by Corey Reed & Vivian Tse, and directed by Millicent Shelton.

Listeners know that I’ve had issues with the show since the departure of Rick Grimes. This episode pulled at those emotions, especially in the cold open and at the end of the episode, with the scene between Michonne and Judith talking about why it seems like people like Daryl, Carol and Ezekiel are no longer their friends. In both cases, the show hit me hard, just like it has for so many years. I wish we’d get back to that more often.

The big secret has been revealed!

It took them eight episodes, but we finally have the story of how Daryl and Michonne get those X scars on their backs. Boy, that was nothing like I expected. In some ways, this episode played like The Grove, Part 2. It had a very Children of the Corn vibe, and kind of a Lord of the Flies. I did not see it coming. I don’t think it was well explained about Jocelyn. Was she always that psychopath? Probably. Did she kill the adults that were traveling with her, did she make the kids do it, or did they perish on their own? I don’t know if we ever get that explained, or if we need to know. It was very disturbing. However, there were some scenes cut that took away from the story, especially showing how Daryl escaped. It was like the video skipped. In fact, I went back three times, thinking I missed something. We speculated that took the scene out because it as too graphic, partially so they could keep objections down about the killing of children in this episode, but, unless they explain it in an interview or a DVD commentary, we may never know.

Judith is a very special little girl, and more!

I was very taken with Judith this episode. She’s been this character who’s been wiser than her years, and I think what we see in this episode is why. She remembered what happened all this time, and still thought they should help people that need help. The scenes with Cailey Fleming were great, and I was really impressed with the character. I also loved the scenes between Michonne and Negan about Judith. He’s very taken with her, and I think this might be the first time we see Negan being a straight-shooter and not posturing or grandstanding. He may be redeemable yet.

Ratings were down this week…

That’s it for Scars!

All three of us enjoyed Scars, and thanks to Steve for coming on the podcast again this week! Please leave your feedback for The Walking Dead, Season 9 Episode 15, titled The Calm Before, by 6 PM Eastern/5 PM Central on Wednesday, March 26, 2019. Check the Facebook group for any deadline changes. I may be taking the week off again, but that hasn’t been finalized.