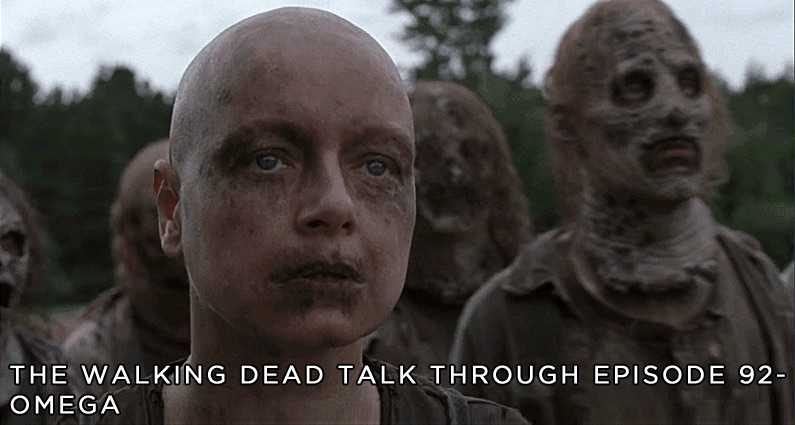 On this episode 92 of The Walking Dead Talk Through, Mark and I discuss The Walking Dead Season 9 Episode 10, which is titled Omega. This was written by Channing Powell, and directed by David Boyd. Like last week, Mark loved the episode. I gave this episode an 8, which isn’t a bad rating, but I had to dig down deep to find things I liked. The story isn’t drawing me in and I found myself bored throughout the episode. I only raised the rating after repeated viewings. It’s well written, directed and acted. I couldn’t find any major faults… OK, one. More on that below.

We see the interrogation of Lydia focussing on a flashback from early on in the apocalypse. As the episode goes on, we see different versions of reality, culminating with the beginning of Alpha. This is a backstory we should have gotten for The Wolves, The Governor and Negan (the latter two were shown in the books and comics) but we only got a backstory for the Termites. It was interesting in the end, but I spent most of the episode confused and bored, and Alpha not all that compelling so far. I didn’t say it on the podcast, but I really wasn’t impressed with Samantha Morton’s portrayal. I was distracted by her unconvincing Southern accent. Lydia, on the other hand, reveals that she is a victim of abuse, and I think we have just seen the tip of the iceberg. Henry!!! You have a good heart, but you are gullible. What would have happened had the baby not cry? Kudos to Cassady McClincy in the role of Lydia. I liked her a lot better than her mom.

Although this episode did not focus on Daryl, he was a big part of the story. His character this season is a big improvement over the last several past seasons. I’m still wanting to find out what the deal is with that big scar on his back. For some reason, though I’ve heard it mentioned, I really noticed his facial scar this time. I was a little confused about how Lydia picked up on his past abuse. I guess there must have been a subtle clue that I missed.

Ratings are… Down to a record low!!!

That’s it for Omega!

Mark will be hosting this coming week. As previously mentioned, I will be stepping back a bit from the podcast, and will not be hosting the show every week, starting this coming week. Part of it is due to scheduling with The Star Trek Discovery Podcast, part is due to some fatigue, and also it’s because the show is not doing it for me like it was, and I want to focus on the family, and on the Star Trek podcast, which is taking up a significant amount of time. Rest assured, you’ll hear from me every week, even when I’m not hosting. Mark will be recording back on Tuesday this week, which special guest co-host Steve Brown, his co-host on Panels to Pixels. So, please leave your feedback for The Walking Dead, Season 9 Episode 11, titled Bounty by 6 PM Eastern/5 PM Central on Tuesday, February 26, 2019. Check the Facebook group for any deadline changes.

If you want to help pay for the editing of this and other podcasts, I mentioned a while back that you can donate credits to my Auphonic account, which I use to make these episodes sound so good! That link is https://auphonic.com/donate_credits?user=bmeloche. Please remember to subscribe to us on Apple Podcasts. Subscribing to us helps us move up in the rankings, so it’ll help us out tremendously! You will get new episodes when they’re released. And while you’re in there, leave us a rating or review! It only takes a few minutes and it helps others to find us!