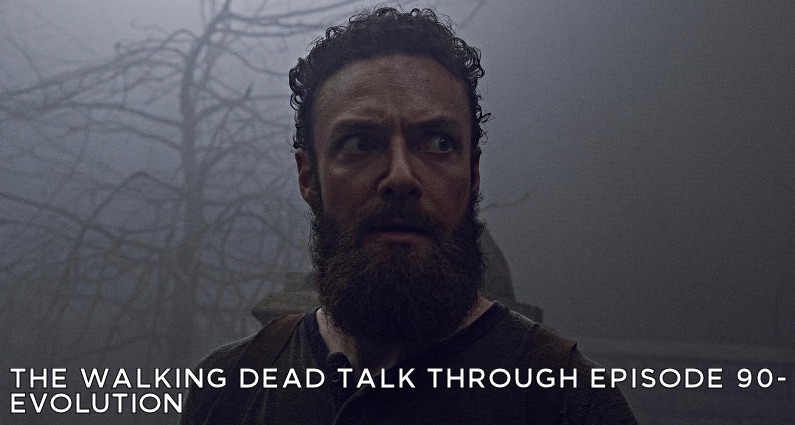 On this episode 90 of The Walking Dead Talk Through, Mark and I discuss The Walking Dead Season 9 Episode 8, which is titled Evolution. This was written by David Leslie Johnson-McGoldrick, and directed by Michael E. Satrazemis. Mark loved this episode, but I didn’t. Some choices were bothering me this time around.

Surprising death… of the character and his jingle!!!

I am not afraid to admit that I enjoyed my Jesus jingle. I enjoyed it a lot more than the character, so now that he’s gone in spectacular fashion, I am sad to see it go. Don’t get me wrong. I am sad to see Jesus go, but he never lived up to his hype. He was just another character on the show. I know he was a much-loved character from the comic book, but in the show, he was underutilized. I never felt like I got to know him very well. He was always in the background. He went out in a great sequence, in a surprising turn. It’s sad that he actually lived up to some of his potential in his last scene.

We get more of this hinting that there’s a big rift between Alexandria and the other communities. Strike that… Not between Alexandria, but Michonne and the other communities. Everyone is giving her the cold shoulder this episode: Tara, Enid, Dianne, and even Carol. Yes, they talk, but notice how they didn’t hug? Whatever happened, I’m starting to feel manipulated, much like I did before we found out the fate of Madison in Season 4 of Fear. I just wish they would tell us what happened.

Too much teenage angst for a mid-season finale!

The trials and tribulations of Henry were things we had seen before, both from Fear S3E3 TEOTWAWKI when Alicia met with the kids of Broke Jaw Ranch, and TWD S5E12 Remember, with Carl meeting Enid and Ron, and then later with Aiden and Nicholas’ walker plaything. I really didn’t need to see this stuff in the mid-season finale. Instead of getting a lot more information about this Michonne vs. everyone else that keeps being hinted at, we get more of Henry. It’s not that I don’t think we should have seen that – it was a timing issue. It could have waited for the back half. Instead, we have 2 1/2 months to wait for any of that to be explained; I could have really used that to be explained a lot more, and I wasn’t waiting for Henry’s story or the other angsty teens. By the way, using cats as bait is not cool. That kid is a serial killer wanna-be!!!

Thankfully, ratings are up for Evolution…

Please leave your feedback for The Walking Dead, Season 9 Episode 9, by 6 PM Eastern/5 PM Central on Tuesday, February 12, 2019. Check the Facebook group for any deadline changes. That’s many weeks away. We’ll probably be back in January, for an episode during the hiatus.