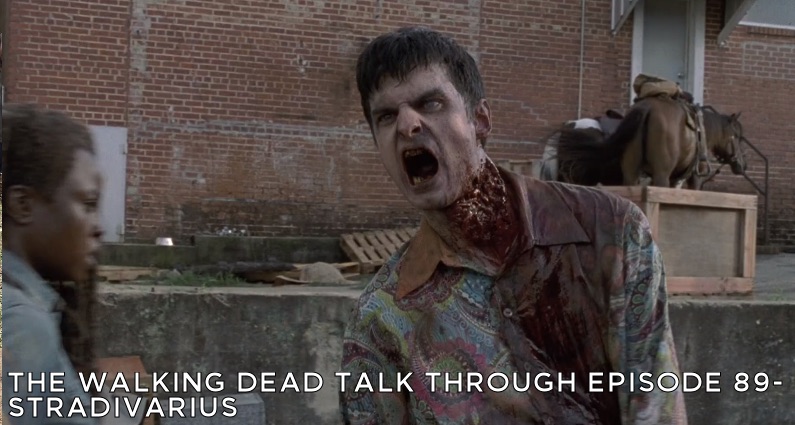 On this episode 89 of The Walking Dead Talk Through, Mark and I discuss The Walking Dead Season 9 Episode 7, which is titled Stradivarius. This was written by Vivian Tse, who is a new writer to the show, and directed by Michael Cudlitz, who I’m sure you all remember played Abraham. This season continues to be the best in years.

It seems like Daryl has been out there, searching for Rick for the past six years, living alone, except for a new dog named Dog. It turns out that Daryl has the same X scar as Michonne does.

Speaking of Daryl and Michonne… and Maggie…

It was postulated that perhaps the rift between Michonne and Maggie could have been based upon Michonne finding out the circumstances behind why Rick was out there in the first place. If she found out that Daryl kept Rick out there to keep him away from Alexandria, and that Daryl’s actions were in part to blame for Rick’s purported death, then I could see there being a rift between Michonne and Maggie, and Daryl could have also been blamed. Maybe that’s why Daryl never went back to Alexandria, in addition to the guilt Daryl has. It doesn’t explain why they both have the same scar. I doubt that Maggie would have done that to them both.

The walkers are speaking now??? Or are they???

Continuing from the end of the last episode, we see Rosita being pursued by a herd of walkers that can speak. She somehow got separated from Eugene, and the episode ends with the search for Eugene, led by Dog!

This week, TWD only got a 1.80 in the 18-49, with 4.794 million, down from 2.02 and 5.396 million last week. The 1.80 marks the all-time low for ratings in the 18-49 demographic. There were two episodes lower in viewers in Season 1, but this episode isn’t far ahead of them. With the mid-season finale airing on the Sunday after Thanksgiving, it’s highly possible that next week’s ratings could go even lower, although I hope I am wrong. Charts below.

Leave us your feedback!

Please leave your feedback for The Walking Dead, Season 9 Episode 8, titled Evolution, by 6 PM Eastern/5 PM Central on Tuesday, November 27, 2018. Check the Facebook group for any deadline changes, and that’s one of the best ways to leave feedback for us!

If you want to help pay for the editing of this and other podcasts, I mentioned a while back that you can donate credits to my Auphonic account, which I use to make these episodes sound so good! That link is: https://auphonic.com/donate_credits?user=bmeloche. Please remember to subscribe to us on Apple Podcasts. Subscribing to us helps us move up in the rankings, so it’ll help us out tremendously! You’ll also get new episodes when they’re released. And while you’re in there, leave us a rating or review! It only takes a few minutes and it helps others to find us!