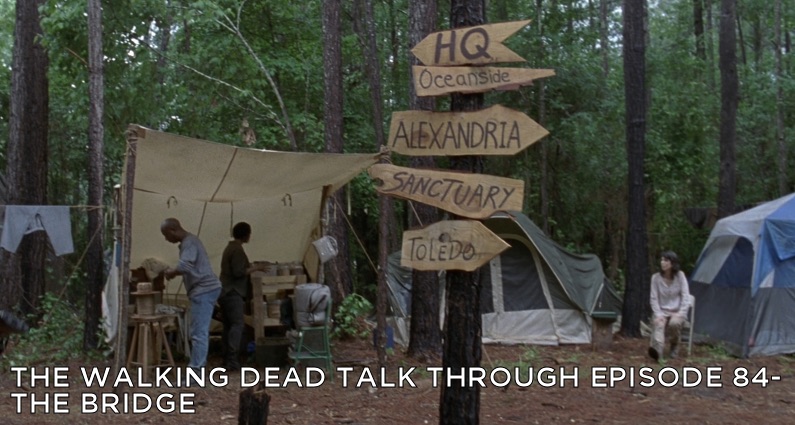 Talking Through The Bridge!

On this episode 84 of The Walking Dead Talk Through, Mark and I talk through The Walking Dead Season 9 Episode 2, which is titled The Bridge. It was written by David Leslie Johnson-McGoldrick and directed by Daisy von Scherler Mayer. We both loved this one and are happy about the direction the show is going so far.

There’s a great action sequence at the lumber camp, featuring the log rolling, a work accident, some great melee combat and Rick shooting the logs free and the awesome destruction unleashed as a result. Aaron’s arm is gruesomely crushed, with flesh and bone showing. Enid is forced to think on her feet and do what she had no choice to do and amputate Aaron’s arm, with Siddiq being back at home dealing with a bug that’s hit Alexandria.

For me, this was one of the best sequences on the show in recent seasons, with outstanding special effects and makeup to make Aaron’s injury so realistic. I was very impressed with these scenes, although some of the backstory was a little sketchy. Why would they put slacker Justin in charge of that second siren post? Did he get what he deserved at the end of the episode? I think so!

We saw some couples this episode, old and new. New couples Jerry and Nabila, Ezekiel and Carol, Anne and Gabriel, established couple (but new to us) Tammy Rose and Earl and, of course, staples Team Richonne! Were you surprised about Anne and Gabriel? Let’s not forget the strained friendships of Rick and Daryl, Michonne and Maggie, and Maggie and Jesus (to a lesser extent). I look forward to how these develop – how many will survive?

Ratings are way down…

As you can see from these rating and viewer charts, created by me, you’ll see that the 18-49 rating hit an all-new low at 1.98, and the 4.937 million is the lowest since S1E4 Vatos. It is normal for ratings for the second episode to be lower than the premiere, but the decline cannot be denied. To contrast, last week got a 2.49 in the 18-49 with 6.076 million viewers.

Please leave your feedback for The Walking Dead, Season 9 Episode 3, titled Warning Signs, by 6 PM Eastern/5 PM Central on Tuesday, October 23, 2018. The best way to submit feedback is on our Facebook group.

Other Fun Stuff Completely Unrelated to The Bridge!

If you want to help pay for the editing of this and other podcasts, I mentioned a while back that you can donate credits to my Auphonic account, which I use to make these episodes sound so good! That link is https://auphonic.com/donate_credits?user=bmeloche. Please remember to subscribe to us on Apple Podcasts. Subscribing to us helps us move up in the rankings, so it’ll help us out tremendously! You’ll get new episodes when they’re released. And while you’re in there, leave us a rating or review! It only takes a few minutes and it helps others to find us!