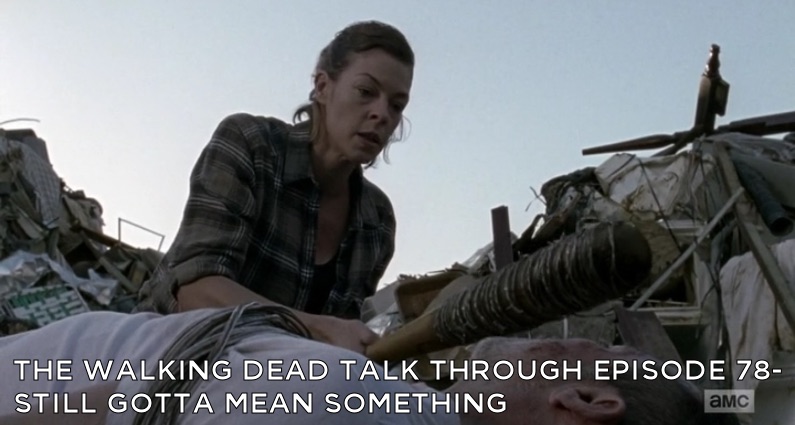 Talking Through Still Gotta Mean Something

This was another great episode. This had action, but it also had character moments.

Morgan is haunted by those words again, from the ghost of troubled kid Henry… except that Henry wasn’t dead after all. He went out there to kill those Savior escapees. Boy, that Jared death was both gruesome, and satisfying! If any character deserved to die, it was Jared.

Carol, after going her separate ways with Morgan, finds Henry, under a tree that looked suspiciously just like the tree Sophia was supposed to hide underway back in Season 2. It was the same tree, by the way, in real life, though they are far away from the suburban Atlanta that the characters were back then. What if Carol found Sophia back then? She definitely was a different character in Season 2. I thought that was a good tie in, as we see other tie-ins to past episodes and seasons elsewhere in this episode. Carol is a lot of things but a coward is not one of them.

Rick, on the other hand, uses the words of Alden, and things he’s said back in S2E8 Nebraska, S4E8 Too Far Gone, and S7E3 Monsters, to entice the Savior escapees to return with them to The Hilltop, but he had other plans. It seems that several of them are lured in, help Rick and Morgan escape, and one of them even kills a walker that was about to get Rick. By the way, I forgot to mention it on the podcast, but I noticed one of the escapees actually called them walkers, so I think they were genuinely interested in coming back to The Hilltop.

However, Rick was lying the whole time, and never intended on doing anything but killing them. I know Carl had other ideas, and really, this is the first time in a long while where I had to question Rick’s intentions. More on that below. Rick gives the hatchet to the guy that saved him just seconds before. I thought the moment after, when Rick asked Morgan why he saved him back in King County, was a little forced and didn’t seem like something the characters would have discussed at that time, had Morgan been staying on TWD. I understood why it was there, but would have appreciated a more natural scene for it.

Jadis and Negan, sitting in a dump…

The scenes with Jadis during and after the massacre were very interesting, but I had an issue with that slip. That didn’t look like it would fit under that coat, plus she had pants on! I don’t know why it was important to have her in that slip… though it shows off Pollyanna McIntosh. Judging her by her appearance on Talking Dead really cleans up well. Really well. I find myself actually CARING for her now, and she was a character I couldn’t stand just a few short weeks ago. Damn you, writers!!!

What was more interesting was the interaction between Jadis and Negan. Negan, strangely, felt more human in this episode than Rick did. The lines have finally blurred some for me. I don’t appreciate how he’s shaped the world according to HIS plan, but he actually shows genuine concern for Jadis, though he spoils it some by saying she can have it all back. When you talk about people being a resource, you disassociate them from who they really are: People. You treat them as things you can exploit, as tools, and not as individuals. This hits home for me, given the recent issues I have been dealing with outside from this podcast.

We see the helicopter again, without any explanation as far as who’s it is and where it came from. I hope we get an explanation in the finale, but that was more than a bit frustrating.

Whom did Negan pick up???

So who do you think Negan picked up? All signs point to Laura, but some say, Gregory. There have been some pictures released about the next episode that shows Gregory, so it is possible it could be him. I don’t think it is Sherry because I think Negan would have had more to say to her.

Despite what I said during the episode, for S8E15, titled Worth, we have to do our podcast a day early due to a scheduling conflict, so please leave your feedback by 6 PM Eastern/5 PM Central on Monday, April 10, 2018.

Other Fun Stuff Completely Unrelated to Still Gotta Mean Something!