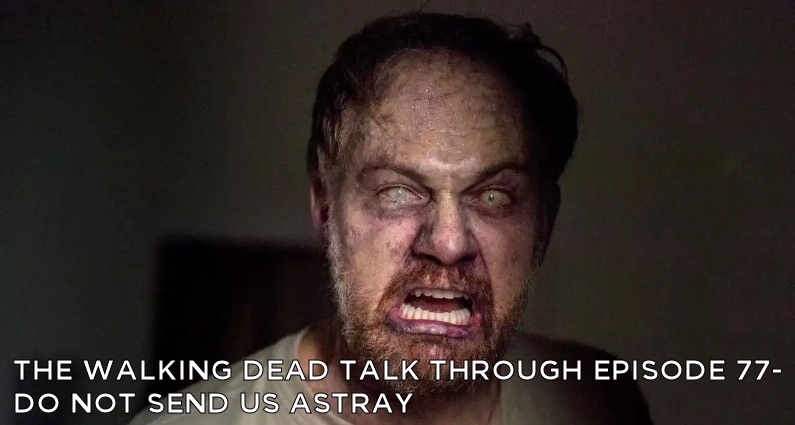 Talking Through Do Not Send Us Astray

This episode gives us some great action, in what I called the best Act 1 ever! I loved it, and this, by far, made me love the episode.

Unfortunately, things go wrong after that. The Saviors use some shady tactics to taint the weapons according to Negan’s plan, even though he wasn’t in the episode. After the battle, people turn. One of them is long-time Alexandria resident and former boyfriend to Carol, Tobin. I am sad to see Tobin, but I will say that he made a SCARY walker!!! He’s so big that his size overpowered people, and fresh zombies are much more scary, in general than ones that have been around since the start and are falling apart.

That kid… Why oh why would he open the gate? He was told that Gavin killed his brother Ben, but I guess he couldn’t accept that. Jerkface Jared and most of the other imprisoned Saviors, along with Gregory, escape, and Henry is nowhere to be found. That darn kid!!!

I couldn’t write this blog post without addressing the dead Gavin haunting Morgan. I have probably said this 50 times since then!!! So, what is it? I speculated that “you were supposed to” goes back to Morgan not killing his wife Jenny and zombie Jenny killing his son Duane. Could “you know what it is” be Morgan’s cowardice? Do you have any thoughts?

We have to address the success of the Negan tactic because it doesn’t match what we have seen before. Since this is a tactic that comes from the comic, we know that it also succeeded there, so what do we make of this? Do we accept it? Well, yes, but not without some concerns. I suggested on the podcast that this restores the INTENTION to make the zombie guts infectious that comes from the comic, but since we have seen several times where bloody knives have cut our heroes, and they’ve worn the guts both on this show and Fear, to no effect. What happened to Gabriel earlier this season, and this event changes how tainted weapons affect people.

To me, this could have EASILY been handled!!! A simple line from one of our people would have made it a lot less problematic, like, “This never happened before. You were cut with that knife and you didn’t die. Why now?” See what I mean??? Wouldn’t that have made all the difference? Instead, they ignore it. I worry that we’re going to keep seeing things like this come up when Angela Kang takes over in Season 9. It’s the little details that mean everything!!!

Other Fun Stuff Completely Unrelated to Do Not Send Us Astray!

Please remember to subscribe to us on Apple Podcasts. Subscribing to us helps us move up in the rankings, so it’ll help us out tremendously! You’ll also get new episodes when they’re released. And while you’re in there, leave us a rating or review! It only takes a few minutes and it also helps us out! And join our Facebook group!