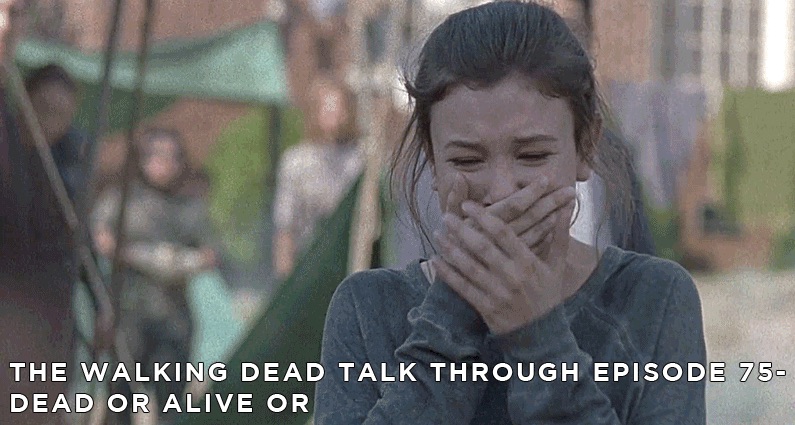 Talking Through Dead or Alive Or

Another doctor bites the dust!

We see the journey of Father Gabriel and The Hilltop’s Dr. Carson try to get back to The Hilltop, and though it seemed like God might be guiding them, they not only end up not succeeding, but Carson is killed in a failed attempt to escape. Dr. Carson is the latest in a long line of doctors/medical professionals who have died on The Walking Dead.

Jenner, Dr. S (from the prison – I forgot about him during the recording), Hershel, Bob, “Porch Dick”, Denise, Dr. Carson’s brother, and now, Dr. Carson himself. We still have a doctor from The Kingdom we haven’t met, and Siddiq, a former resident, and that means he IS a doctor, and you will hear a rant about that during the episode about several podcasts that got this point wrong this week, so I’m guessing at least one of them won’t survive the season. I felt bad for Gabriel, ending up with Eugene (who is a bit of a jerk this episode). Will he die? Will he get back his eyesight? He just continues to screw things up, though I would have to put this one on Carson, for doing such a dumb thing. As a doctor, he is a most valuable person to have around, yet like Denise, he does such a dumb thing, a lot dumber than Denise did.

Exactly how much time has passed since the beginning of Season 6? Maggie’s still not showing yet. How long has it been since Dwight killed Denise? I know Tara has every right to be mad at Dwight and not want to work with him, but her behavior is a bit out of character. It also makes her a hypocrite, when you consider that she stood beside The Governor when he killed Hershel. Dwight shows he is working with our group, but then has to go back to Negan.

I intentionally picked the Enid picture because this was the moment that finally got me to shed a tear for Carl. That was a heartbreaking moment to watch, seeing joy turn into sorrow.

I was able to improve on the reverb in this episode, but it’s still not quite up to the sound quality at the old place. I’ll keep working on it.

Going back to Tuesdays

Mark and I have decided to go back to Tuesdays for recording since it seems to make it easier for listeners to submit feedback. Therefore, for S8E12 titled The Key, please leave your feedback by 6 PM Eastern/5 PM Central on Tuesday, March 20th, 2018.

Other Fun Stuff Completely Unrelated to Dead or Alive Or!