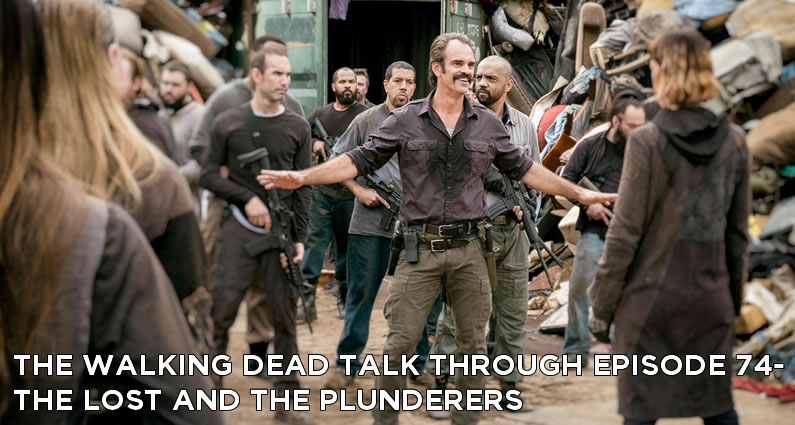 Talking Through The Lost and the Plunderers

This week’s episode is not up to our normal audio quality. This is the first episode that I’ve done at our new place, and it ended up being very echoey with a lot of reverb. I’m working to correct this for next week. Also, we had a few technical issues on top of that, and that didn’t help. I corrected, or at least improved, some of the issues before handing the files off to Kyle for editing, as I was too busy with the move and the process of cleaning up the old place for a sale. Thanks to Kyle for editing this episode. I know it wasn’t easy.

This episode brought back the use of title cards. Most prominently, we saw them in the 5th season premiere, No Sanctuary. We see title cards for Michonne, Negan, Enid, Simon, Jadis and Rick, a total of six cards instead of five, as I mentioned in the recording (I was tired… so sue me!). Mark and I thought this was the best episode we had seen from The Walking Dead in a long time, and definitely the best of the season so far.

We actually felt something for Jadis???

We actually felt sympathy for Jadis for the first time, after seeing her go through this brutal attack. Hopefully, she will become a more sympathetic character going forward.

Ratings are WAY down from last week

The Lost and the Plunderers got a 2.86 in the 18-49 demographic, with 6.820 million viewers, down considerably from 3.64 and 8.282 million viewers last week. I’m guessing people were interested to see what happened with Carl but were really disappointed that he’s gone. I expect more erosion of the viewership going forward.

Other Fun Stuff Completely Unrelated to The Lost and the Plunderers!

Please remember to subscribe to us on Apple Podcasts. Subscribing to us helps us move up in the rankings, so it’ll help us out tremendously! You’ll get new episodes when they come out. And while you’re in there, leave us a rating or review! It only takes a few minutes and it also helps us out!