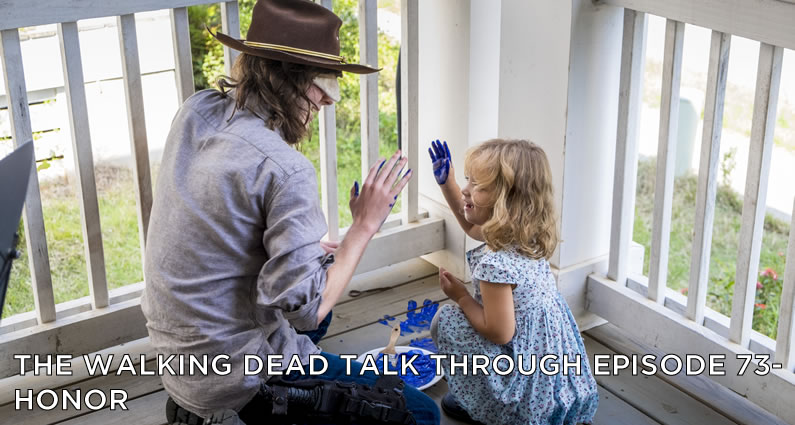 On this episode of The Walking Dead Talk Through, we discuss Season 8, Episode 9 of The Walking Dead, the mid-season premiere, which is titled Honor. Joining me is my new co-host, Mark Kirkman! No relation! 🙂 Mark was a guest host for our Episode 68. I’m pleased to have him along for the ride.

We have been waiting for two and a half months to see what would happen to Carl. Some would not accept that he was going to die, others mourned him, while others were happy about him going. While I was sad that Carl has passed on, I was surprised that I did not cry during the episode. For those of you who have been listening to us for a while, you know that The Walking Dead makes me cry, sometimes a lot. I expected to cry, but I didn’t. I’m still unsure why. I can only assume that it’s because the episode, particularly those Carl scenes, weren’t as well written as they could have been.

The Walking Dead’s Batman and Robin: Morgan and Carol!

The scenes in The Kingdom, on the other hand, I found very compelling, particularly Morgan’s “gut-wrenching” scene with a Savior. 🙂 This episode also saw the death of the seemingly reluctant Savior leader, Gavin. It was tragic to see the young Henry be the one to kill Gavin, although their sudden reluctance to kill Gavin came a little late for a lot of Saviors. Overall, we thought this episode was middle of the road, although I seemed to like it a little more than Mark did. Not terrible, but not fantastic either.

For S8E10, titled The Lost and the Plunderers, please leave your feedback by 6 pm Eastern/5 Central on Monday, March 5th, 2018.