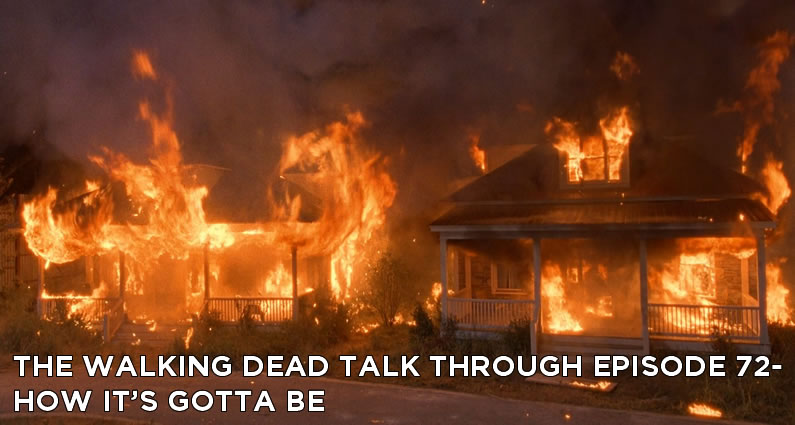 Talking Through How It’s Gotta Be

On this episode of The Walking Dead Talk Through, we discuss Season 8, Episode 8 of The Walking Dead, the mid-season finale, which is titled How It’s Gotta Be. For this episode, I am joined by returning guest hosts Ben Beck, co-creator of the Next Level Network and co-host of the DC Prime Time and Next Level Showcast podcasts, and frequent feedback contributor Lara! I think you’ll agree that, yet again, both guest hosts did a fantastic job discussing the mid-season finale!

We were warned by AMC that we would be shocked by something that would happen at the end of the episode, and most of us were, although that wasn’t our primary emotion. On the Facebook group, the majority of respondents in our poll were feeling sad after this episode, many were confused, some mad, some were indifferent, amazed and even happy and a few of us were all of the above. I felt many emotions about it, which I share in the episode.

STOP READING IF YOU HAVEN’T SEEN THE EPISODE!!!

Initially, I LOVED this episode, but after repeat viewings and thinking about the episode more, some of that love has faded. This episode has a lot of plot holes, some things I did not like, and some real head-scratchers. I’m more positive than many, but I can’t help but criticize this episode, and much of the season so far. I still love the show, but I can’t help but wonder what I would have done differently if I had my writing cap on, and I think a lot of people are there with me.

In this episode, we learn that the Saviors were able to escape the Sanctuary. They attack Alexandria, The Kingdom and the leaders of The Hilltop. I believe Maggie and the group were heading to The Sanctuary relatively simultaneously. It completely changed the course of the war. I didn’t get into it too much during the recording, but exactly how many Saviors are there? The “AHK” or like I say in the podcast, “HAK” (for Hilltop, Alexandria and The Kingdom) wiped out all three outposts. Well, the Saviors don’t know The Hilltop has 38 POW’s, but they are effectively out of the war for now. Yet, it seems that The Sanctuary STILL has enough “Negans” to take over all three at the same time! How? And how quickly did they come up with this plan?

OK, I’m burying the lead. We learn that Carl has been bitten, and in a place that can’t be amputated. Both by going back and re-watching the episode more than once, and by listening to showrunner Scott M. Gimple on Talking Dead, he was bitten while helping Siddiq “release souls” in S8E6, which is something that was mentioned during our episode 69 as a possibility. I am sad to see the character go, but the show has always done well when departing from the comic book. The imminent death of Carl, which will probably happen next episode, will pull the story in new directions and not follow the comic book. We can only hope things get better.

When this podcast comes back in late February, I should have a new co-host. That person is still TBD. When the show comes back for S8E9, titled Honor, please leave your feedback by 6 pm Eastern/5 Central on Monday, Feb. 26th, 2018.

Other Fun Stuff Completely Unrelated to How It’s Gotta Be!