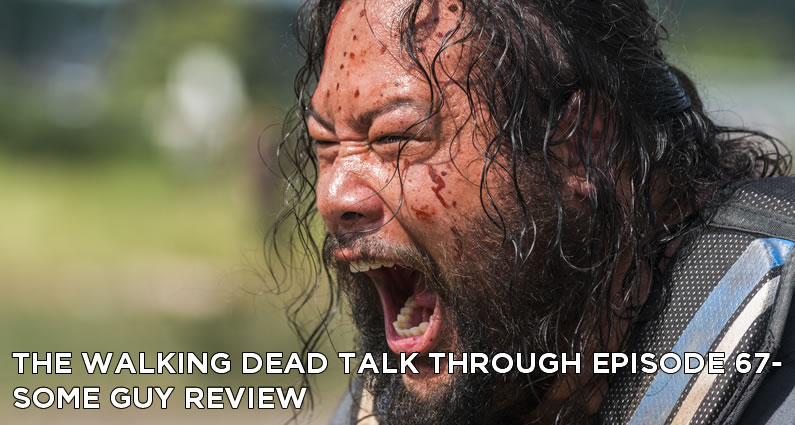 Talking Through Some Guy

On this episode of The Walking Dead Talk Through, we discuss Season 8, Episode 4 of The Walking Dead, which is titled Some Guy, and the post-Ruthie period of this podcast begins. For the rest of this half-season, through Episode 8 in December, TWDTT will feature a core of rotating guest hosts. For this episode, I am joined by Allison Fike of The Dead Connection, and long-time listener, Malika Tazi! I think you’ll agree that both Allie and Malika were great discussing this episode!

Ezekiel went through a lot!!! Carol got her groove back!!!

SPOILER!!! In this episode, King Ezekiel tried to renounce his throne, after losing lost most of his guard, and his beloved Shiva. I know that affected many of you were affected by this loss. It was heartbreaking, but I guess it seemed that Shiva could have gotten away made me a little less affected. Well, that, and the fact that I got spoiled about this episode, but you’ll have to listen to find out more! On nicer things that we saw in this episode, it was good to see Carol in Season 5 & 6 form again, kicking ass as only she can!

We will have another early feedback deadline this week, so please leave your feedback by 6 pm Eastern/5 Central on Monday, Nov. 20th for S8E5, titled The Big Scary U. Although the guest host schedule is already booked until the mid-season finale, I could always use more people to add to the stand by list, plus we may do additional hiatus episodes. If you’re interested in appearing as a guest, please contact me. Most likely, the permanent co-host will be from one of the guests you’ll hear during this period. Only one co-host will be chosen!

Allie let us know that her website, The Dead Connection, is having an incredible autograph giveaway this month, and wants to encourage you to sign up! They have giveaways every month, but this particular one is special because it’s none other than Norman Reedus!!! Enter for your chance to win! Remember to like The Dead Connection’s Facebook page!

Other Fun Stuff Completely Unrelated to Some Guy!