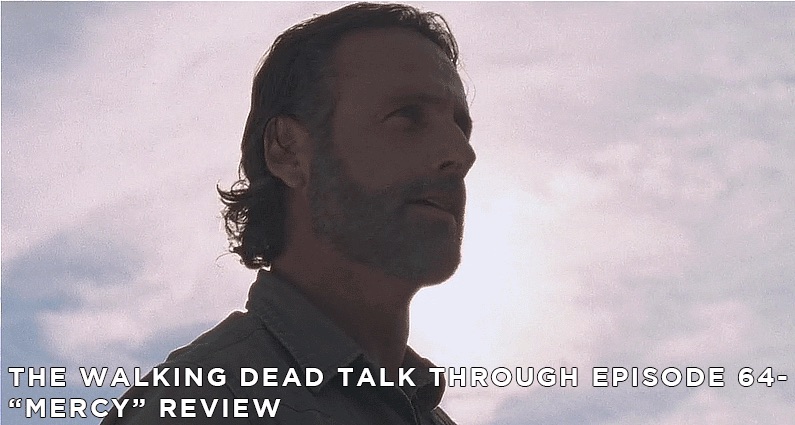 Hi, Brian here, and Season 8 of The Walking Dead is finally here! We have been teasing the return of Ruthie for weeks now, but she’s out sick this week, and my Fear the Walking Dead Talk Through co-host Kyle wasn’t available to sub in, but I was able to secure some special guests to help me analyze S8E1, titled Mercy. Joining me are fellow podcasters Reese Nicole Brown of The Introverted Nerd Watches and Ben Beck, co-creator of the Next Level Network and co-host of the DC Prime Time and Next Level Showcast podcasts.

It’s All Out War!

This episode marks the beginning of either the season or half-season, of a section in the comic book known as All Out War. Rick comes to the Sanctuary, with the start of an elaborate plan to defeat the Saviors. All goes well, except for one thing… The episode is also marked by what appears to be three timelines: The main timeline, either future, possible future or dream timeline, with an older Rick, and what may be a near-future Rick, standing by a grave, with red eyes. Time will tell what the heck this all means, but we’ll be watching!

We also re-examine the TWD/FTWD crossover, with Ben and Reese giving their thoughts on it.

Ratings are DOWN CONSIDERABLY over last season!!!

We want your feedback!

Remember to leave us your feedback for next week, S8E2 titled The Damned by Tuesday 6 PM Eastern/5 Central. One of the best ways to leave feedback is on our Facebook group.