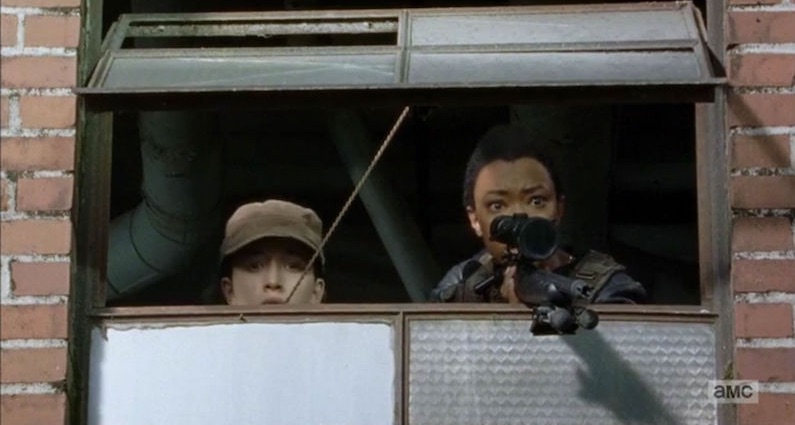 Talking Through The Other Side

The Other Side, also known as the antepenultimate episode of season 7 of The Walking Dead, was a rather middle of the road episode for the two of us. While it wasn’t terrible, it didn’t really knock our socks off either. This episode mainly focused on the unlikely–and reckless–pairing of Sasha and Rosita, with a little bit of the Hilltop, sprinkled in for good measure. While we know what it is that motivates them, it’s hard to understand why they are making such rash decisions. It also seems unlikely that Sasha will survive her decision.

The little bit we got at the Hilltop definitely brought this episode up, and I don’t mean Gregory’s bootlicking. We both enjoyed the non-verbal cold open as well as the heartfelt scene between Maggie and Daryl. Although it seemed like a long time coming, the moment was just right. We already knew that Maggie didn’t blame Daryl, but it was really nice to hear her say it out loud and alleviate some of Daryl’s suffering. I am not sure how that scene could have been any better.

And now for a few questions! First of all, I would really like someone to tell me why people still follow Gregory. Seriously. What’s the deal here? Next, what will Eugene do about his “rescue” attempt? Will he tell on Sasha and Rosita? Also, what is up with Eugene, is he really Negan, or is he running some kind of long con? Has he truly forsaken the friends who took him in and looked after him? Is Eugene really just looking out for number one? Finally, who was the figure with the crossbow at the end of the episode? Did Daryl have enough time to get to the Sanctuary? Could it have been Dwight? If it was Dwight, what will he do to Rosita, assuming he sees her?

We want to know your answers to these questions and more so please, drop us a line and tell us what you think! Please send in your feedback for Season 7 Episode 15, titled Something They Need by Tuesday 6 PM Eastern/5 PM Central.

Other Fun Stuff Completely Unrelated to The Other Side!