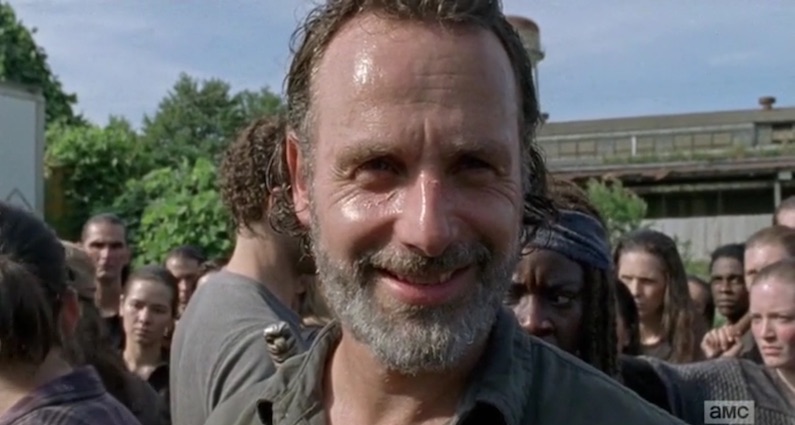 Talking Through Rock in the Road

What an episode back from hiatus! Rock in the Road showed us all the things we wanted, and none of the stuff we didn’t. As Brian said, it was Negan without Negan. Unfortunately, even though I love Jeffrey Dean Morgan, a little Negan goes a long, long way for me. You may remember that we argued about the blobby shadow in the front seat of Father Gabe’s car and wondered what it might mean if anything. We got to see a little of the Hilltop, and a little of the Kingdom. We also got to see the coolest clothesline ever!

And now for a few things I may or may not have said before, and maybe some questions, too! I thought it was rather interesting that Richard doesn’t call Jesus by his nickname, but rather by his given name, which in case you forgot (I know I did) is Paul. In any case, he didn’t seem to be very trusting of Jesus, or happy to see him, but maybe he’s just naturally mistrustful and unhappy. I feel sorry for Richard, it seems like he carries so much on his shoulders. He knows what the right thing to do is, but can’t seem to convince his leader of the same. One thing I kept meaning to bring up was the identity of the new group that our gang encountered at the end of the episode. Keeping in mind that I have never read the comics, and so, therefore, have no real idea…I couldn’t help but wonder if this was the group I’ve heard called the Whisperers. From the comic, the scuttlebutt is that the Whisperers are another enemy, so if they are, that would make them another group of bad guys. I guess we will find out soon.

Please leave your feedback for The Walking Dead, Season 7 Episode 10, titled New Best Friends, by Tuesday 6 PM Eastern/5 PM Central. One of the best ways to submit feedback is on our Facebook group.

Things Unrelated to Rock in the Road