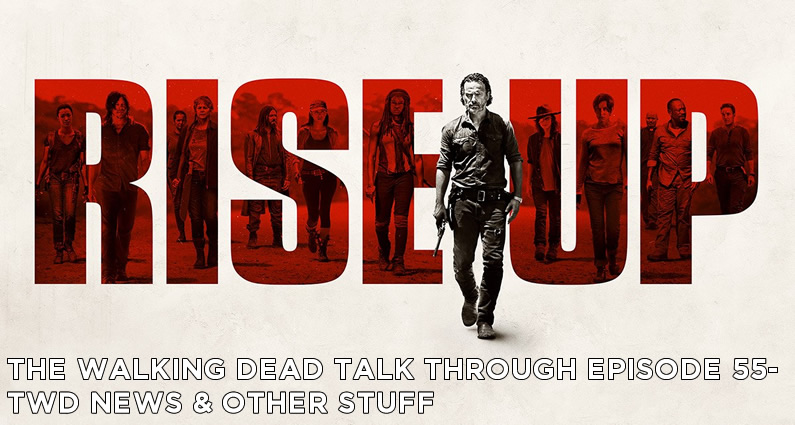 The Walking Dead Talk Through
TWDTT 055 - TWD News & Other Stuff

Hello, all! We’re back! Brian here! I’m doing the blog post duties for this week. It’s been a while, hasn’t it? Yup… just shy of two months! But, in a few more days, our beloved show, The Walking Dead, returns for the second half of Season 7!!! We can’t wait to talk about it with you! First, we have TWD news!

This episode, at least the last two-thirds of it, is a bit of a departure from our normal content. Recorded last week, it starts off normally enough, with a lot of news on The Walking Dead that happened over the hiatus. Then, we talk about our impressions of 7A now that we’ve had some time away, then we discuss what I’ve been able to piece together about The Walking Dead Season 7B. I also talk a bit about my re-watch of TWD that I completed over the hiatus, and how my impressions of certain episodes have improved over time.

Talking Through Other Stuff!

After that, we do something unusual and talk about TV shows and films that we watched over the hiatus. If you want to bail out at that point, you can. We won’t mind! However, if you want to listen to us talk about other shows, I watched a lot of TV while I was trying to rest, and most of it was quite good. I thought I’d start things off by mentioning something I technically watched a little BEFORE the hiatus, which was the AMAZING Stranger Things!!! I watched the last eight episodes of Westworld that I hadn’t seen yet. My impressions have improved a lot with that show, but I’m still not as big of a fan of that show as Ruthie is.

However, we do a much deeper dive to talk about Game of Thrones. I finally watched seasons 2-6 over the break, and my impressions of GoT have completely changed, and I’m now a big fan. In fact, I want to apologize to our listeners for anything I’ve said negative about that show over the years because I was completely wrong about that show! It’s now one of my favorites!!! I also watched seasons 2 and 3 of Black Mirror, which is very good as well but a bit more hit and miss watched the pilot Better Call Saul but decided to postpone watching the rest of that until it’s closer to when Season 3 comes in April. I also saw three movies over the break: Star Trek Beyond (liked it but thought the first two movies were better). Mad Max Fury Road, and Train to Busan. I forgot to mention Train to Busan this episode, but we definitely will touch upon it next week. It’s now one of my favorite zombie movies! Well worth watching!!!

Ruthie also watched a lot of TV over the hiatus. She talks about Travelers, The Crown, Victoria, the Sense8 and Dr. Who Christmas specials, and the final season of Sherlock, none of which I’ve seen yet.

That’s it for TWD News and Other Stuff, until next week!

We want to hear your feedback for the mid-season premiere, so tell us what you think. Has Rick Grimes smiled yet? We love audio feedback the best!

If you feel so inclined, please check out Ruthie’s GoFundMe. She’s got her new computer, but could still use other computer accessories and recording equipment.