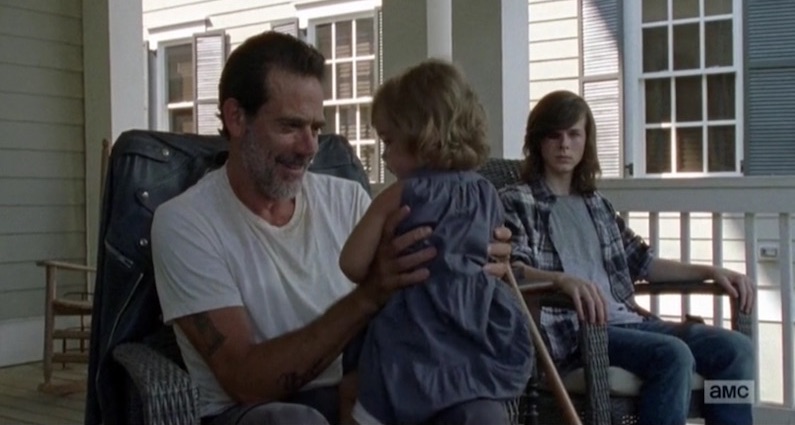 Talking Through Sing Me a Song

Sing Me a Song is the title of the next episode of The Walking Dead, also known as season 7 episode 7, and the penultimate for this year. It is also another way that Negan shows how he is a prick because he makes Carl, our little serial killer in training, do just that. While the seemingly budding bromance between Carl and Negan was the main focus of this episode, we also checked in with Rick and Aaron, Spencer and Father Gabriel, Rosita and Eugene, and Michonne. It seems that our characters are going off in all different directions, both literally and figuratively while they all try to cope with their new Savior situation. Michonne and Rosita are both hell-bent on getting themselves killed…er, I mean going after Negan. While Michonne doesn’t need anyone’s help so no one really knows what she is up to, Rosita drags Eugene into her plan by bullying him into making her a bullet. He tries to save her from herself by talking her out of it, but she is having none of that. Spencer is off being a whiny baby and actually makes Father Gabriel wish he hadn’t come along with him, so much so that he chooses to walk back home. You know when F.G. is fed up with you, it’s bad. Meanwhile, Rick and Aaron are actually being useful by getting something interesting.

Now that was a long episode!

Whew, it seems like a lot went on this episode, but since it was 90 minutes…not really. While this episode wasn’t my favorite by a long shot, it wasn’t as bad as I was expecting. There were only a few scenes I enjoyed; however, Brian enjoyed this episode way more than I did. To varying degrees, we were both a little disappointed by it, even though his rating doesn’t really reflect that. There is almost always room for improvement. Unless you’re talking about the season 5 premiere. That one seems to be the gold standard for both of us. Gareth really was scary, but it was mostly because of his indifference to human life. For this episode, though, there is nothing scarier than seeing Negan holding a baby.

It’s your last chance to give us feedback for the year, and we really want to know what you think about this first half of season 7. We seem to be getting less and less each episode, and we don’t know if it’s because less of you are watching, or less of you are listening to us. In any case, let us know by sending us some audio feedback! It’s our favorite! Please send in your feedback for Season 7 Episode 8, titled Hearts Still Beating by Tuesday 6 PM/5 PM Central.

Other Fun Stuff Completely Unrelated to Sing Me a Song!

Or if you feel so inclined, please check out my GoFundMe. I am still accepting donations to pay back my insurance.