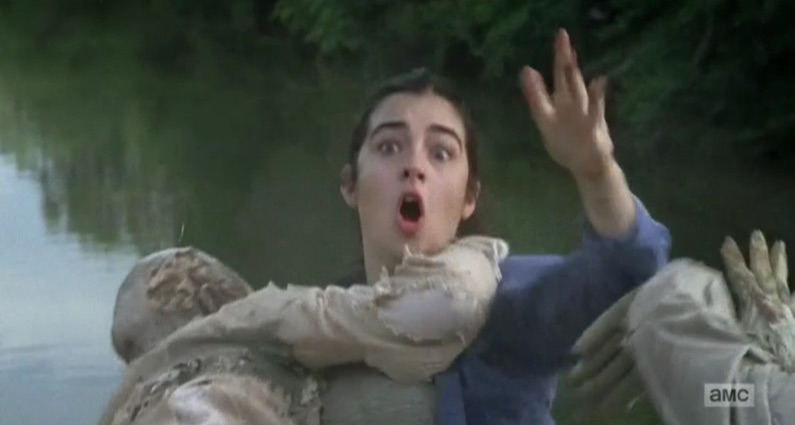 Talking about Swear… Without Swearing! 🙂

Swear means we only have two more weeks of The Walking Dead this year, but it also means all Tara all the time. The sixth episode of season 7 caught us up on what happened to Tara and Heath after that fateful night at the Savior outpost. When they left, our gang still had no idea what was to come, but when Tara returned, she returned to a post-Negan world where everyone is a nail, and Lucille is the hammer. Fortunately, we didn’t have too much to be said about this episode, except feeling sad for Tara when she feels sad. Otherwise, she was a much needed bright ray of sunshine.

One of my favorite things throughout this episode was Tara’s particular brand of funny. She is such a fun and funny character, I don’t think we really realized how much we missed her until she came back. Her optimism is infectious and by the way, what a difference lipstick makes! Yowza! Alanna Masterson is such an amazing actress who is also stunningly beautiful. But back to the lecture at hand. Oceanside, or the Amazons, as I call them, seems like a great place to settle down, but unfortunately, they have a shoot first ask questions later kinda policy. My question is, why did Cyndie decide to make an exception for Tara, again and again? Because of this, I think Tara feels obligated to swear to Cyndie that she won’t tell anyone, even the people she lives with, about the Amazons, but how long will that promise hold out? Also, what in heck happened to Heath?

Please leave your feedback a little early this week!

We have to move up the deadline again this week, so please leave your feedback for The Walking Dead, Season 7 Episode 7, titled Sing Me a Song, by Monday 6 PM Eastern/5 PM Central. One of the best ways to submit feedback is on our Facebook group.

Other Things Unrelated to Swear!