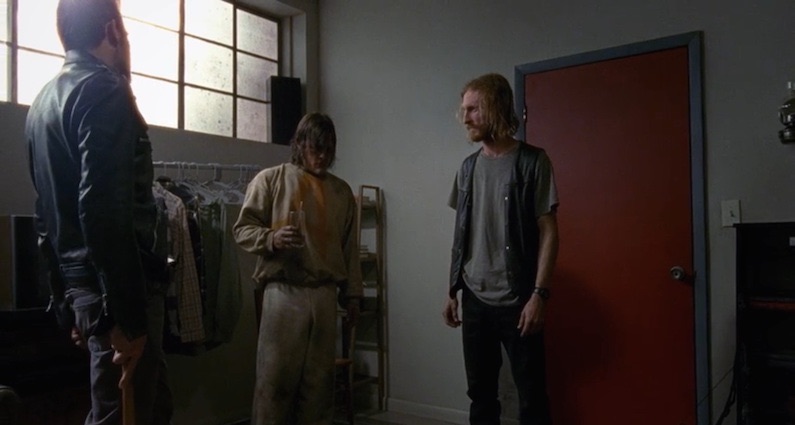 Talking Through The Cell

The Walking Dead’s third episode of season 7 takes us to the Sanctuary, as Negan’s home is called, and we learn a little bit more about Dwight. Meanwhile, the title of the episode, The Cell, is where Daryl spends most of his time. Also, he’s naked. That’s right, Daryl was naked for part of this episode. So if you didn’t watch it, you missed out. Because it was sexy time. Okay, not really, it was a terrible kind of naked that wasn’t sexy at all, but rather, very, very sad. Daryl was brought to his lowest point in the series so far: no clothes and being fed dog food sandwiches. He even cried at the end, and our hearts broke as poor Daryl only had Dwight to comfort him. A masterful performance by Norman Reedus, this episode nevertheless left some of us wanting a little bit more.

Easy Street, the earworm of The Walking Dead!

This episode should have been called Easy Street, for the obvious reason. What an effective use of a song!

We still haven’t found any reasons to like Negan, or to love to hate him, or to even think he might be anything more than just a classic narcissistic megalomaniac. He is a bully, and as I have said before, I just don’t like bullies. I still wonder why everyone puts up with him, and how long it will be before people get tired of bowing and scraping all the time. He is just one man after all. As one listener pointed out to us, based on his “hot wife, hot sister” speech, he’s not even that witty or charismatic. I have yet to figure out why people follow him, or even why they are afraid of him. He is, after all, only one man. And I don’t think anyone feels anything for him but fear. I don’t think there is any respect or love there, not like in The Kingdom. Speaking of The Kingdom, I shall echo what Lara said, can we go back there now…?

We want to hear from you! Leave us your feedback and tell us all your thoughts about what happened in the episode. If you don’t make it in time, that’s okay, we have a whole section for feedback from the previous week that we can bust out as needed! So what are you waiting for? We especially love audio feedback! For The Walking Dead Season 7 Episode 4, titled Service, please submit your feedback by 6 PM Eastern/5 PM Central on Tuesday, November 15, 2016.

Other Fun Stuff Unrelated to The Cell

Or if you feel so inclined, please check out my GoFundMe page. I need a new computer to continue doing this in a bad way! I have a pretty nice, like-new refurbished Mac mini picked out, but I still need about $305 to get it. Thank you, thank you everyone who has helped so far! I’m so close now, I can’t believe it!