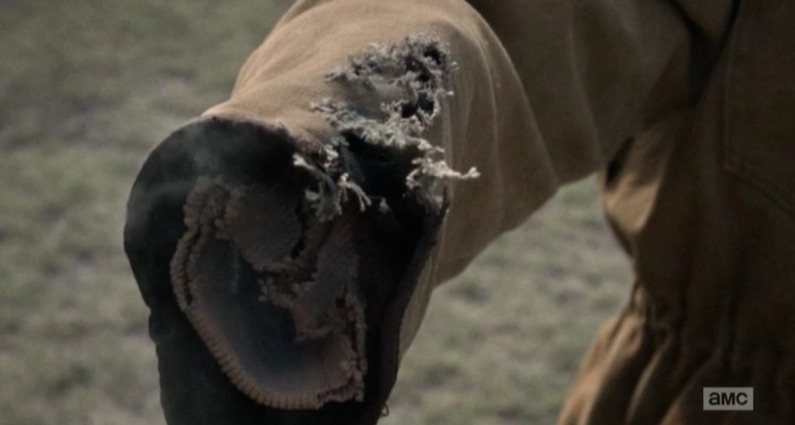 Our discussion of the penultimate episode of season six is here! East is the title of that episode and unfortunately, it did not wow everyone; and some of you were rather disappointed at what happened and what some of our gang did. We hope that after listening, we were able to talk you off the ledge a little bit. What we can all agree on is that we are nervous, excited, scared, and a whole host of other emotions about the 90-minute season finale coming this Sunday! Come to think of it, with so many 90 minute episodes this season, maybe they should have just kicked it up to 18 episodes this year…? Nah.

Negan is upon us

What will happen when our intrepid heroes finally meet Negan? Should we just skip the question of will someone die, and go straight to who will die? It seems more and more likely that we will lose a beloved character. Who will it be? You can’t always trust the show to follow the comics exactly, so there’s no helpful hint there. Is anyone safe from Lucille? We know we haven’t actually met Negan yet, but from all we’ve heard, he doesn’t sound like a very nice guy. I still maintain that our gang members are the good guys, even if they have made some morally ambiguous decisions this second half of season 6.

Not mentioned during the recording…

A few more things to mention about this penultimate episode: I really do love saying penultimate! 🙂 Can you tell me what kind of firearm Carol sewed into her sleeve? I’d really like to know. If it was just a made up gun… well, I’d like to know that, too. Also, I didn’t say it when we recorded, but Rick kinda looked like he was strung out on crack when he parted ways with Morgan. Was it because he had been hoofing it and that guy gave them the slip? At least, he looked normal by the time he got back to Alexandria. I still hope that Morgan and Carol will have some quality alone time together to maybe help balance each other out so that they won’t both be so paralyzed by what they are going through. I think they can really help each other, but I want them to show up at the end of the finale to save the day! Something tells me that won’t happen, though.

We were overwhelmed by the amount of audio feedback we got for this episode. I’m not sure we’ve ever had three people send us audio in one week! If we have, it’s been so long that we forgot. So thank you Cutter, Lara, and Sarah. Consider the gauntlet thrown down to the rest of you! Or you can just send us your feedback the regular way. We won’t be sad. Much. Please leave your feedback for the season finale of The Walking Dead, Season 6 Episode 16, titled Last Day on Earth, by 6 PM Eastern/5 PM Central on Thursday, April 7, 2016. We will be covering your feedback in a second episode, hence the later deadline. One of the best ways to submit feedback is on our Facebook group.