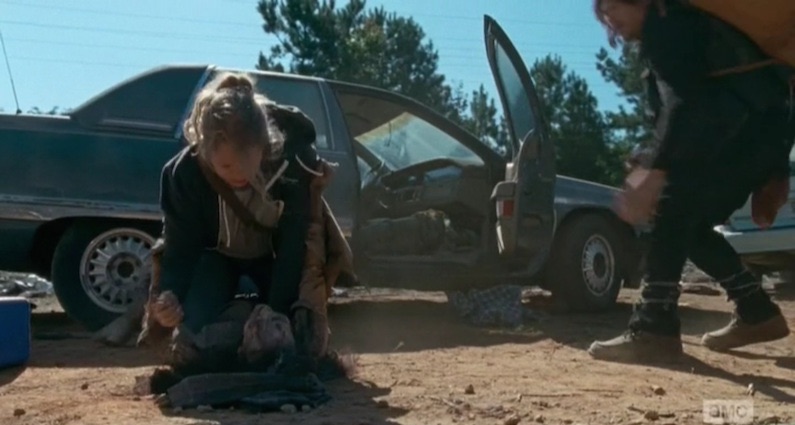 Talking Through Twice as Far

We may have come Twice as Far with this episode, but we’re only half ready for what happened. Two beloved characters gone, one for good, and yes, we definitely need therapy after this next episode of The Walking Dead.

What Not to Do if you star in a Zombie show…

Just make sure if you ever appear on a zombie apocalypse show that you never experience any character growth. And don’t become the moral compass. Don’t make plans for the future. Do any of those and you’ll probably get killed off. How many more encounters with the Saviors will our gang have before it destroys them? Or before it destroys their spirits? Dr. Denise may have been awkward, but she was the best kind of awkward. Merritt Wever did such an amazing job of bringing this character to life that we barely got enough time to get to know and make us love her. Merritt and Denise, I’ll miss you terribly.

About the cold open, they are trying something new from what they have done before, and I like it. They aren’t stuck in a rut and that they aren’t afraid to try new things. Some of those things will land for some of the audience; some will fall flat. At least, they aren’t going to just “play it safe” and ride this success wave as far as they can. What I liked about the cold open is that they were able to convey information without exposition, which is always nice, and that they made us pay attention. I also liked how the cold open-ended with Carol and the rosary, and the episode ended with Morgan noticing Carol was missing. Not quite a bookend, but again, they are keeping it interesting.

There’s no I in Team…

When Daryl did not want to take the train tracks, it occurred to me that he is not always the most diplomatic person. In other words, whereas other people might take the time to say why or why not, Daryl just does what he wants sometimes without explanation. I bet if he had taken the time to tell Rosita and Denise why he didn’t want to take the tracks, they probably would have indulged him. But the way it went down, as Brian said, they weren’t really acting like much of a team (which should have clued me in that Denise was doomed!), and sometimes to be better teammates, we need to be vulnerable and expose our soft gooey center.

I am going to tackle one of my biggest pet peeves this episode, the term “begging the question”. I had it right. It describes a fallacy in logic and philosophy. You may know it as circular logic. The technique is used most often during formal debates and is derived from the Latin phrase petitio principii, which if you believe Wikipedia actually means “assuming the initial point.” If you want to learn more about how it has been subverted for popular usage because probably one time someone somewhere used it wrong and other people thought that person was smart and so more and more people wanted to be smart, too…well, you can do your own google research on that. But, here are a few websites about begging the question that I like that explain it a little bit more: BTQ, Grammar Girl and NY Times.

We got a ton of feedback again this week from our Facebook group and one solitary audio submission. Cutter, you get the gold star this week! I can only assume that the reason you all don’t submit more audio feedback is that you really enjoy our dramatic readings of what you have to say. Please leave your feedback for The Walking Dead, Season 6 Episode 15, titled East, by 6 PM Eastern/5 PM Central on Tuesday. One of the best ways to submit feedback is on our Facebook group.

Ratings were even, viewers slightly up

In the U.S., we’re stuck at 32 Apple Podcasts reviews. Help us boost our Apple Podcasts notoriety by giving us a review or rating! We really want to break 40 before our 40th episode (or my 40th birthday!). Subscribing to us helps us move up in the rankings, so it’ll help us out tremendously! Plus, when we release new episodes, you’ll get them! While you’re in there, leave us a rating or review! It only takes a few minutes and it also helps us out! And check out our Facebook group!