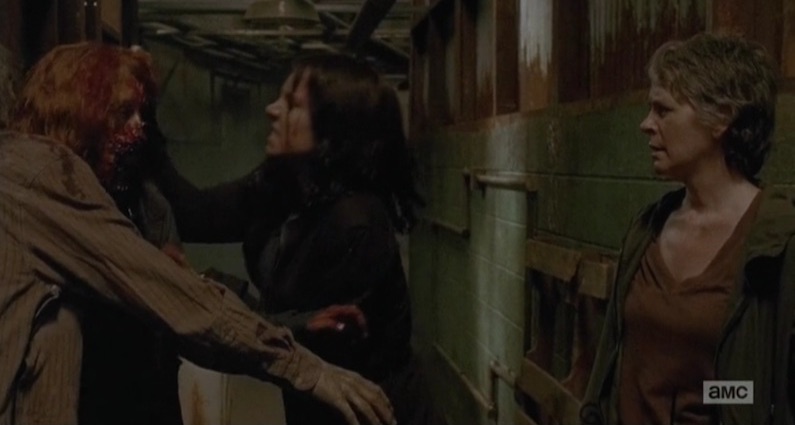 Talking Through The Same Boat

In The Same Boat, all of the characters this episode are in the same boat; at least, that’s how it seems in the beginning. By the end of the episode, they are not in the same boat at all. In fact, it appears that our gang has come out on top, but at what cost to Carol and Maggie? They both appear to be in a bad way after their own experiences from the Savior invasion.

We are rewarded with a tender moment for Daryl and Carol (a moment which has been lacking for quite some time we might add!), as well as for Glenn and Maggie. It might not be fair to pick favorites, but I liked the Maggie and Carol power hour storyline way better than Abe’s tripping over his “sack o’ gonads” story. And what a tour de force performance from Alicia Witt, complete with the unglamorous Walking-Dead-style make-under that just helped her be even more amazing!

Did our gang really come out on top, though? It seems that they won this one, but what will happen in the future? We got a prediction from Sofie about that, so make sure you listen right to the end to hear it! We’d love to hear from each of you about your predictions, so give us some feedback and tell us what you think will happen at the end of the season. Sofie also gets the gold star for sending us audio feedback! Yay Sofie!

Every group thinks they are the good guys, just like no villain actually sees themselves as the villain. I was pretty hot under the collar when ‘Chelle said that our group is not the good guys. Our gang doesn’t go cutting off digits of fingers for stealing, or telling people that the way you stay alive is you produce for them? In what world does that make you the good guys?

Our group is more of a family where all the individuals pitch in and have an equal voice. If one person wants or needs to go out and search for a missing loved one, no one would have to “steal” to do it. I get the feeling that “We are all Negan” kind of means that it’s all about what’s important to Negan. Alexandria doesn’t go out trying to find people to oppress, they want to trade. As Brian pointed out, in war even the good guys have to do things that you normally wouldn’t do, and I don’t think you can apply the same morality that we have now to the zombie apocalypse. I am just really tired of everyone saying that Rick and the gang are the new bad guys because, to me, they are not. Not yet, maybe not ever. But we shall see.

Please leave your feedback for The Walking Dead, S6E14, titled Twice as Far, by Tuesday 6 PM Eastern/5 PM Central. One of the best ways to submit feedback is on our Facebook group.