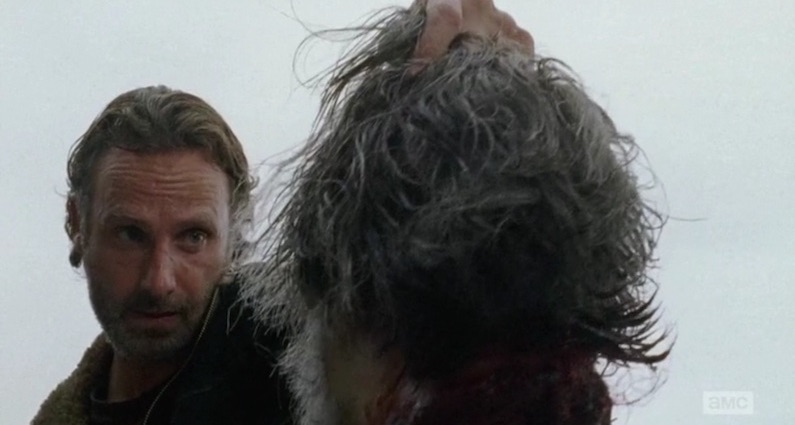 Talking Through Not Tomorrow Yet

Not Tomorrow Yet is the next full speed ahead episode of The Walking Dead. With a cold open focused on Carol, we knew it would be a knockout episode, and she finally gets some sugar! But then, in the end, she gets kidnapped. Bummer. But we all know that Rick and the gang will do anything and everything to get Carol and Maggie back into their safe and loving arms. Only a few days left until we find out how they will do just that, but will it be that simple? Who will be the next beloved character to leave the show? Will it be your favorite? Will it be mine? Do I have just one?? The suspense is almost killing me!

A few things I didn’t mention…

And now for a few things I didn’t mention when we were recording. Abraham is a jerk…oh wait, did I already say that? Well, it bears repeating. I kinda hope his “thing” for Sasha blows up in his face, and I hope that Sasha is the woman I think she is and that she will not want to hook up with someone who could be so cruel. But, it’s a TV show, so I probably won’t get my way.

I understand that they wanted the element of surprise on their side, but I still didn’t understand the immediacy of their actions. Why could they not have taken a couple of days to do a little bit more scouting? More knowledge is always better, and I think it was a little foolhardy to go in guns blazing without knowing all they could know. It seems clear now that this is not the only “Savior” compound. Why is Carol smoking now? This I don’t understand, especially with her chiding Mrs. Neudermeyer about it. Rosita has a very good point when she’s talking to Carol about Morgan and she says, “We don’t wanna kill, we don’t like, it happens,” which kind of makes how Morgan is acting seem like too much of an extreme for the ZA.

Send us your feedback!

We are again so grateful for the audio feedback we got this week and we hope for more! As always, we will take it in whatever form you wanna give it to us! Please leave your feedback for Fear the Walking Dead, Season 6 Episode 13, titled The Same Boat, by 6 PM Eastern/5 PM Central on Tuesday, March 8, 2016. One of the best ways to submit feedback is on our Facebook group.

Ratings same and up, depending on what you’re looking at…