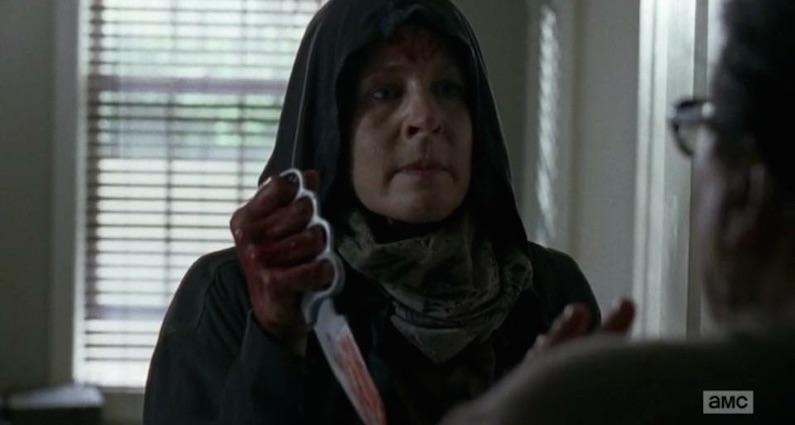 After a somewhat slower start for some fans, this second episode kicked season 6 into high gear with some non-stop action, and all in the time it takes to bake a casserole! Walkers are not the main danger in JSS, that honor goes to perhaps the craziest group of people on the show yet. The Wolves don’t seem to be killing to conquer or killing for food, but rather just for the fun of it. How long will Morgan survive in this world where the motto kill or be killed is the way of life, and what put him on his path of non-lethal violence?

Once again, Carol was the rock star of this episode. She activated her beast mode (thanks Kyle for coining that phrase!) and nearly single-handedly eliminated the threat. How will everyone else in Alexandria react when they realize that she had been putting on an act before the attack? And is the unflappable fan favorite finally succumbing to the burden of her chosen path? I think Morgan is right, Carol doesn’t like killing, even though she does it without hesitation. Perhaps she is no longer able to lie to herself about it, which is why we see the tears at the end.

What will become of Morgan? Is he leaving Alexandria for good, or just going to help with the zombie parade? And perhaps the most heartbreaking question of all…will Morgan survive season 6? There is at least one podcast host that sincerely hopes he does.

I forgot my theory…

Finally, speaking of that one podcast host, due to some technical difficulties, I completely forgot to talk about my theory/prediction during the episode, even after I made all that fuss about it. So, I will just explain it, briefly, here. I think that Jessie will become a little “mini-me” for Carol and that she will study at the feet of the master the art of becoming a badass. I think their similar backgrounds helped, in a way, to prepare them for living in the zombie apocalypse, and the death of the abusive spouse is what triggers the emergence of the inner badass. Now that Jessie is free to be who she was always supposed to be, she and Carol will become the biggest, baddest BAMFs in the new world, and will roam the earth killing what needs to be killed… yeah.

What do you think?

Tell us what you think about the season so far? What about my crazy theory? We ask because we absolutely crave your feedback! We feel so lucky to have so many people interact with us, we can’t tell you how much it means to know that you are out there listening. For the next episode, The Walking Dead Season 6 Episode 3, titled Thank You, please submit your feedback by 6 PM Eastern/5 PM Central on Tuesday, October 27, 2015. A great way to send in your feedback is via our Facebook group.

Ratings are down, but that’s not unexpected