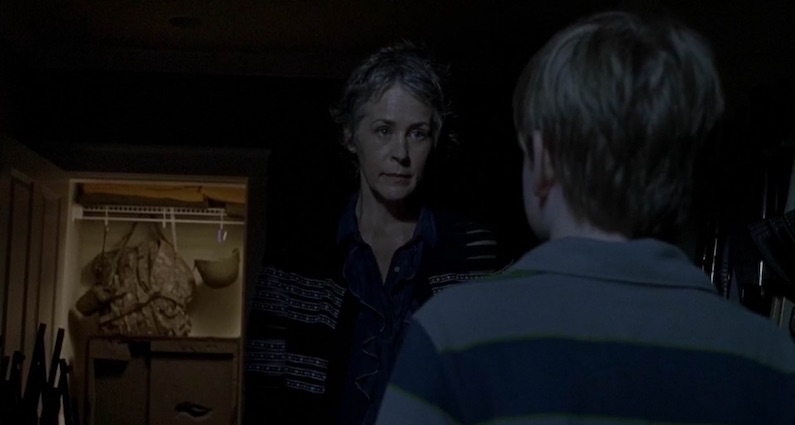 We went to a Cocktail Party…

In a weird twist of fate, our gang ends up at the apocalypse’s most awkward cocktail party this episode. Our favorite survivors seem to have mixed feelings about the whole affair, but what is very clear is how different they are from the Alexandrians. This is perhaps most dramatically expressed when Sasha, apparently suffering from PTSD, loses her cool at the party. Carol is still playing the role she has chosen for herself, although she is not as invisible as she might have liked when Sam follows her, hoping for more cookies. What he got instead lead us to our third nickname: Scary Carol! Rick seems to be taking his role seriously, and Daryl strikes up a bromance with Aaron. So much going on in this episode and we both really liked it.

The ratings were up and they were down, but The Walking Dead was still cable’s number one show for the week. Talking Dead got a boost, too, coming in at the number two slot for cable. If you haven’t ever watched it, you should check it out. As with all shows, not all episodes hit the mark, but, depending on the guests, it can offer some interesting insights. Only three remaining episodes this season, and we are on the edges of our seats! Forget got a 7.30 in the 18-49 demographic, with 14.534 million viewers. This is down from last week‘s 7.50 in the 18-49, but up from 14.430 million viewers.

In other news, the spinoff has officially been announced! Er, should we say “companion series?” Whatever you call it (because they still haven’t announced the name!), they have already locked down two seasons. Will you check it out? Let us know what your thoughts are about the soon-to-be newest addition to The Walking Dead universe. Are you excited? Bummed? Neutral? Give us a shout and let us know this and all of your other thoughts about all things TWD. We love to hear from you! And send in feedback to the next episode, The Walking Dead Season 5 Episode 14, titled Spend.