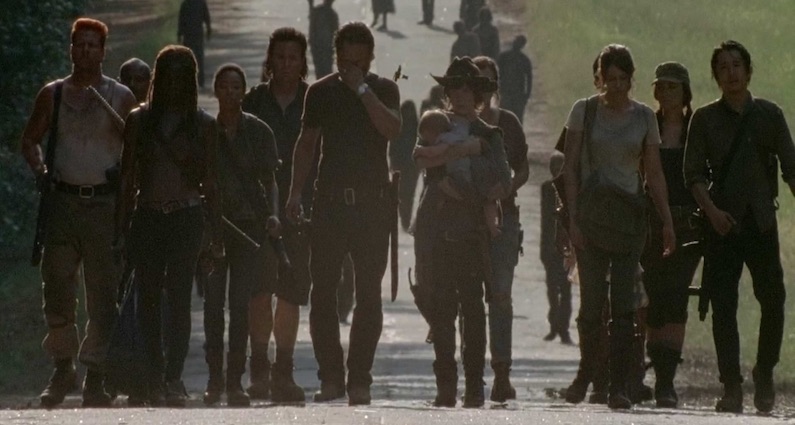 This week’s episode of The Walking Dead was a bit of a departure from the previous one. Our gang has been through the wringer, and they are definitely feeling it! Not very much action or danger, this poignant episode focuses on three characters and their journey through grief.

For anyone who has ever lost someone, this episode may have hit very close to home. Sasha, Maggie, and Daryl struggle with their grief as the whole gang searches for water. It has been three weeks since Atlanta, and after the last car finally runs out of gas, they must continue on to D.C. on foot. The task seems daunting, but most of the group are determined to make it. Our focus trio must decide for themselves if they want to give up or if they want to continue fighting. And what would an episode of The Walking Dead be without a twist ending?

The ratings were down this week, but was it a result of the high viewership that the SNL 40th Anniversary Special received? Or is it true what fellow GSM hosts Tony and Joe have said on their podcast, The Devil You Know, that the ratings actually reflect how the audience felt about the previous episode? Tell us what you think, is it because of SNL or the contrary reactions to last week’s episode?

We had one bit of feedback this week from De’Etta (yay!) but we are still waiting to hear from the rest of you out there in cyberspace. Please leave your feedback for The Walking Dead, Season 5 Episode 11, titled The Distance, by Tuesday 6 PM Eastern/5 PM Central. One of the best ways to submit feedback is on our Facebook group.

Other Fun Stuff Completely Unrelated to Them

To read about the Wizard World Comic Con in Cleveland go here.

To see more information about the Walker Stalker Con in Chicago can go here.