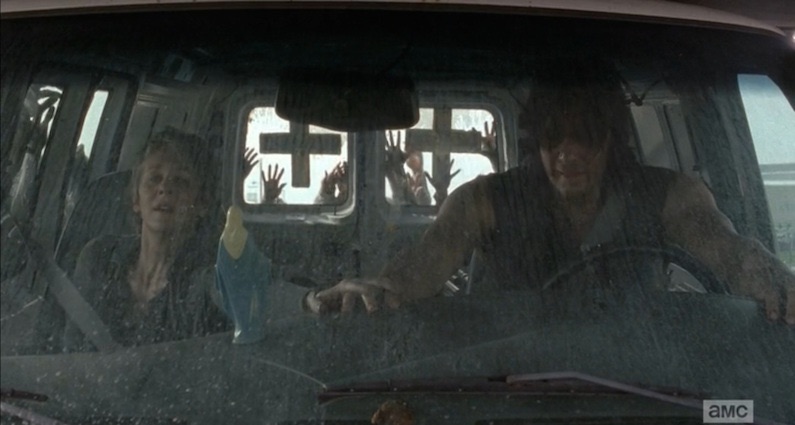 Only two episodes left until the mid-season finale after Sunday’s amazing Daryl and Carol episode, full of subtlety and substance. Consumed is one of the best episodes of the season, according to one host at least. It had only one tiny flaw.

Carol and Daryl pursue a car like the one that stole Beth all the way to Atlanta, where they search for clues to where she might be inside the city. Along the way, they meet Noah, who makes a very bad first impression. We see little bits of Carol’s journey from when she was banished by Rick up to the point where she came out of Terminus. Was she really aiming for his leg? What were those crazy Grady people doing with the bicycle? Will the shippers ever get satisfaction from Daryl and Carol? And what were the producers thinking with that van?

The Walking Dead was still ratings gold for AMC, coming in at number one for another week in cable ratings, and oh yeah, beat football. Consumed got a 7.30 in the 18-49 demographic, with 14.068 million viewers, up from last week‘s 7.00 and 13.530 million viewers.

Send in your Feedback!

Since we have a little bit of a break coming up, we want to know what you want us to cover while TWD is on hiatus. Also, we want to know what you had for breakfast…er at least one of us does. What we really want is to hear from you! Leave us your feedback and tell us what you think the most Awesome Sauce moment in the episode was, who your Survivor of the Week was, or if you have any Death Predictions. Please send your feedback for Season 5 Episode 7 of The Walking Dead, titled Crossed, by Tuesday 6 PM Eastern/5 PM Central.