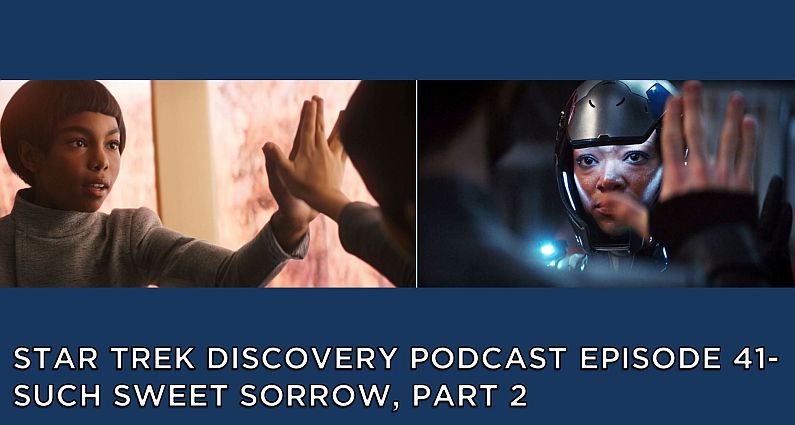 For episode 41 of The Star Trek Discovery Podcast, Ruthie and I complete our discussion of Season 2 Episode 14 of Star Trek: Discovery, which is titled, Such Sweet Sorrow, Part 2. This episode was written by Michelle Paradise & Jenny Lumet & Alex Kurtzman, and directed by Olatunde Osunsanmi. For this episode, we go through voicemails and other general feedback, our notes, and news.

This is our third and final podcast covering this episode. We recommend that you start our coverage of the season finale by listening to episode 39, and then listen to episode 40. In episode 39, we go over feedback from the previous episode, and also ratings and Yeses. In episode 40, we cover Nos and Hold Your Horses.

Like the last episode, the images were chosen by Fred from The Netherlands, including the cover image. We let Fred’s pics do the talking for us! We have a supersized amount of pics for this episode, divided between this episode and last week’s episode 40, with a few pics in episode 39. These pictures cover the second half of the episode.

What we thought about Such Sweet Sorrow, Part 2…

After a week, I still love the episode, but I am more sensitive to its flaws and maybe it’s not quite as good as I originally thought. Why couldn’t they beam out Cornwell? Why would Control break down after Leland is neutralized? For that matter, why didn’t Control go after Burnham? How was Ash able to be on the Chancellor’s ship, leading the fight? How did the Kelpiens go from their primitive state to piloting fighters in such a short time? These are all nitpicks to me, though, and don’t affect my ultimate rating, at least that much.

A couple of things I mentioned in the episode were the Ford Pinto and the AVE Mizar. But one thing I didn’t realize about the AVE Mizar during the recording was that the inventors of the “roadable aircraft” were killed in a test flight. I don’t feel so great about making fun of it anymore, because of knowing those unfortunate circumstances.

That’s it for Such Sweet Sorrow, Part 2!

We are taking a well-deserved hiatus. We plan to be back sometime in June. At that time, we plan to do a Season 2 roundtable episode. We’ll cover other feedback we haven’t had a chance to answer yet, and any other feedback we get on these last three episodes after that. While you can respond to this episode or the previous two, so we will not be covering any feedback received until episode 42 at the earliest, but probably not until episode 43 or 44.

You can submit feedback via the feedback page, Facebook Group, Twitter, you can email startrekgsm at gmail dot com, or call the voicemail at (216) 236-5449 and leave us a message there. Make sure to mention that you’re calling The Star Trek Discovery Podcast when you call. We would like to keep our episodes down to a more reasonable podcast length. To help with this, we’d like you to focus on a few key points, or even random observations, rather than discussing everything about the episode. If submitting a voicemail, please try to keep your calls to 4 minutes or less.

Looking for our RSS Feed? Not anymore! Want to participate? Join our Facebook group! And follow us on Twitter! And don’t forget to subscribe to us on Apple Podcasts! While you do, we’d appreciate it if you can leave us a review, and hopefully, a 5-star! Or, if not, a rating will do!!! And we’re now on Spotify!

And now, here’s a visual look at Such Sweet Sorrow, Part 2!

They must leave without Spock…