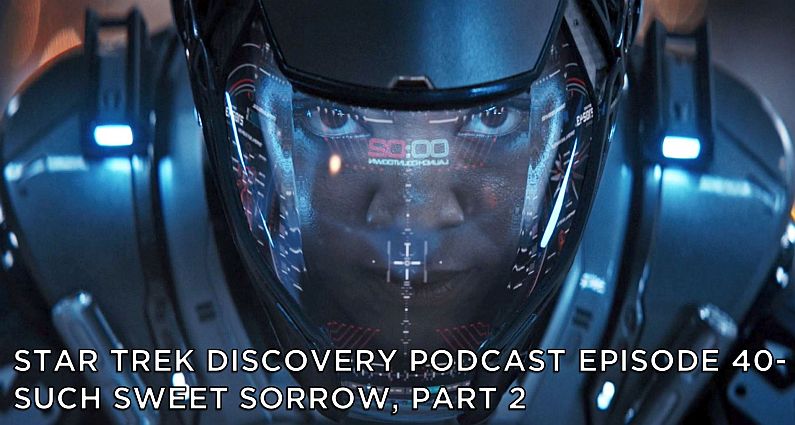 For episode 40 of The Star Trek Discovery Podcast, Ruthie and I continue our discussion of Season 2 Episode 14 of Star Trek: Discovery, which is titled, Such Sweet Sorrow, Part 2. This episode was written by Michelle Paradise & Jenny Lumet & Alex Kurtzman, and directed by Olatunde Osunsanmi. So, for this episode, we are focussing on the parts of the episode that our listeners and we had problems with – and we highlight them in our Nos and Hold Your Horses sections.

Because this is our second podcast covering this episode, we recommend you start our coverage of the season finale by listening to episode 39 if you haven’t already done so. In that episode, we go over feedback from the previous episode, but also ratings and Yeses. Because we had so much feedback for this episode, there will be a third episode to follow. Thanks go out to my co-host on Fear the Walking Dead Talk Through, Kyle, for doing most of the editing on this one! I finally got a bit of a break! 🙂

We go back to our previous format and use pics chosen by Fred from The Netherlands, including the cover image. And Fred’s pics do the talking for us! Because we have a supersized amount of pics for this episode, divided between this episode and episode 41 when it’s released. So, you’ll see more pics next time! These pictures cover the first half of the episode.

What we thought about Such Sweet Sorrow, Part 2…

We both loved this episode, and it was probably one of the best ones of the series. That said, though we all (but one person) rated it highly, it does have flaws. Like the previous episode, this episode is greater than the sum of its parts. It is interesting, though, for an episode to score so high in ratings, yet have as many Nos and Hold Your Horses highlighted. By the way, a lot of people are really psyched about Discovery heading to the future but I’m not so sure.

It feels like a bit of a copout, to be honest, done to appease some of the angry fanbase, some that will never be satisfied no matter what they do. I worry that setting it so far in the future may make all other series prequels to Discovery, the opposite problem they had before, hampering shows like the Picard show, the Section 31 show, and other shows coming down the road. I would have much preferred Discovery end up in the same era as the Picard show will be, so they could play in the same sandbox, so to speak. Maybe they will end up there? Who knows.

More coverage of Such Sweet Sorrow, Part 2 next week!

We’ll be back next week with even more coverage of the season finale, covering your feedback, our notes that haven’t been discussed yet, and news, adding in some additional news that’s happened since we recorded. While you can respond to this episode, we will not be covering any feedback received until episode 42 at the earliest. You can submit feedback via the Feedback page, Facebook Group, Twitter, you can email startrekdiscovery@talkthroughmedia.com, or call the voicemail at (216) 232-6146 and leave us a message there. Make sure to mention you’re calling The Star Trek Discovery Podcast when you call.

We would like to keep our episodes down to a more reasonable podcast length. To help with this, we’d like you to focus on a few key points, rather than discussing everything about the episode. If you are submitting a voicemail, please try to keep your calls to 4 minutes or less, with an absolute maximum of 5 minutes. We would like to keep our episodes under 2 hours! Please help with that!

Do you want to participate with us? Join our Facebook group! And follow us on Twitter! And don’t forget to subscribe to us on Apple Podcasts! While you do, we’d appreciate it if you can leave us a review, hopefully, a 5-star! Or, if not, a rating will do! We are also on Spotify!

And now, here’s a visual look at Such Sweet Sorrow, Part 2!