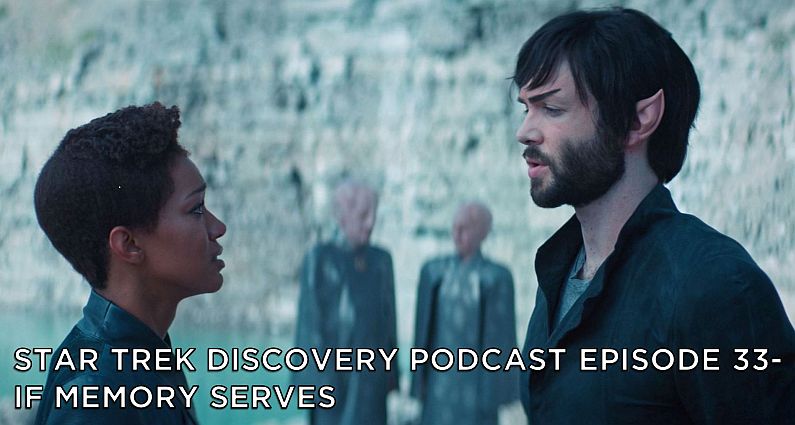 For episode 33 of The Star Trek Discovery Podcast, Ruthie and I discuss Season 2 Episode 8 of Star Trek: Discovery, which is titled, If Memory Serves. This episode was written by Dan Dworkin & Jay Beattie, and it was directed by TJ Scott.

Discussion on If Memory Serves begins at 13:41…

We begin the podcast with feedback from the previous episode. We get into this episode at 13 minutes 41 seconds.

We have been blessed yet again with pics chosen by Fred from The Netherlands, including the cover image. We will show them throughout this blog post. To that end, SPOILER ALERT! If you haven’t watched If Memory Serves, you may want to stop reading here!

In an unprecedented move, that many people say was brilliant, our “Previously on…” segment at the start of the show had something we have never seen before. It was “Previously on” from another Star Trek show! In this case, of course, it was “Previously on Star Trek”. We saw some classic images from the first pilot episode of Star Trek, titled, “The Cage”, which was also featured in the two-part TOS episode, “The Menagerie”.

For me, this was very unexpected but very welcomed. It also signaled something I already knew but it was good to have the evidence: This show takes place in the same prime timeline as The Original Series, TNG and all the rest of the series that followed. It’s just a visual and technological update to bring it to a 2019 standard, but it follows the same story canon as all the other shows. The success or failure of what the producers did was discussed at length. I loved it, understood what it meant, and was so happy to see them do this. Ruthie, on the other hand, was confused by it, and she talks about why at length during the episode.

When Burnham and Spock arrive in the Talos system, they encounter a black hole, or is it? Of course, it’s just a projection from the Talosians. Spock comes out of his state to take control of the shuttlecraft.

When they land on Talos IV, they are greeted by Vina, the same woman Pike and the Enterprise encounter there a few years before.

When they were on Talos IV, the connection Pike had with Vina, though the Talosians tried to force them to mate in captivity, was very real. The powers they have to project communication across light years is quite impressive. I thought it was cool that they could do this and go undetected by Section 31.

The Talosians say that Spock’s mental breakdown happens because he is experiencing time as a fluid rather than a linear construct. It wasn’t very obvious how the Talosians fixed Spock in this episode. Sure, they showed him his visions, his escape and how he didn’t kill the personnel on Starbase 5, but what did they do exactly? That much is unclear. We both had some problems with what they actually did to him, but Ruthie had a bigger issue with it than I did.

As payment, the Talosians want to experience the rift between Spock and Burnham that occurred in their childhood that we had heard about all season long. Some thought that the scene that ended in Burnham calling Spock a “half-breed” a disappointment, but we both thought that it was just the cherry on top. The things she said to Spock were hurtful, but they also made him realize that his emotions could cause damage, and they were the catalyst to making him deny his human side and focus on his Vulcan side and devote himself to logic.

Spock is reunited with Pike!

And then, there’s Culber

After not seeing him for an episode, we get to see how Culber is doing. Not good. Culber is disassociated from his old life. Poor Stamets, who can’t fathom why Hugh is so distant from him, as Culber pulls away. When asked why he’s mad at Paul, Hugh questions it himself and decides he needs to confront the man who murdered him, Tyler, who has more in common with him than he may realize. These scenes are painful to watch, as you really feel what Hugh is going through, and can relate in a most surprising way. In many ways, this was the show at its most powerful.

The fight with Tyler was something you don’t normally see in Star Trek, between two people who are not themselves. It was very powerful stuff.

Carving out a Section of Section 31 for herself

We also see the machinations of Georgiou her manipulation of Leland and Section 31. We are really enjoying seeing Georgiou here. She’s such a complex character. One of the best parts of the episode was the “Say Goodbye Spock” scene at the end that took place on the Section 31 flagship.

That’s it for If Memory Serves!

That’s a lot, but we still left off a bunch of stuff. There’s Airiam and what she’s got going, framing Tyler, Saru and Tilly moments, as well as a reunion with Pike, but we should be able to cover those later. I gave this episode my first 10 out of 10 for the series. To me, this was close to perfection. Ruthie, on the other hand, found a lot of this episode confusing, particularly the Talos IV elements, though she still liked it as a whole. While I see a lot of what she said, I still am not compelled to change my rating. I absolutely loved this episode. We’ll be back in a week with our next episode.

As always, your feedback is essential to this podcast! We’ll be having a short feedback deadline most weeks this season, due to scheduling issues. We’ll cover more feedback from S2E8 If Memory Serves. For Star Trek: Discovery S2E9, which is titled Project Daedalus, the deadline to get in your feedback is Friday, March 15, 2019, at 6 PM Eastern/5 PM Central or 11 PM UTC. You can submit feedback via the feedback page, Facebook Group, Twitter, you can email startrekgsm at gmail dot com, or call the voicemail at (216) 236-5449 and leave us a message there. Make sure to mention you’re calling The Star Trek Discovery Podcast when you call.

I’m also podcasting on The Walking Dead. Because of this schedule, we are trying to get our episodes down to a more reasonable podcast length. To help with this, we’d like you to focus on a few key points from the episode, rather than discussing everything about the episode. If submitting a voicemail, please try to keep your calls to 4 minutes or less, with an absolute maximum of 5 minutes. We would like to keep our episodes under 2 hours! Please help with that!