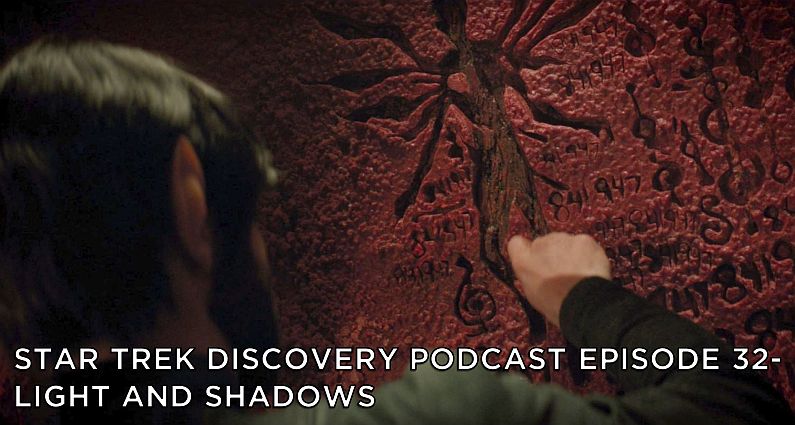 For episode 32 of The Star Trek Discovery Podcast, Ruthie and I discuss Season 2 Episode 7 of Star Trek: Discovery, which is titled, Light and Shadows. This episode’s teleplay is by Ted Sullivan, from a story by Ted Sullivan & Vaun Wilmott, and it is directed by Marta Cunningham.

Discussion on Light and Shadows begins at 7:57…

We begin the podcast with feedback from the previous episode. We get into this episode at 7 minutes 57 seconds.

We have been blessed yet again with pics chosen by Fred from The Netherlands, including the cover image. We will show them throughout this blog post. To that end, SPOILER ALERT! If you haven’t watched Light and Shadows, you may want to stop reading here!

Spock has been found!!!

Burnham decides to go to Vulcan to see if Amanda had any luck finding Spock, knowing she probably wouldn’t tell Michael if she did. Going back home reminds Burnham of her childhood years, growing up in the house, and the times she spent with young Spock.

Spock is on Vulcan, and he’s really messed up. We learn something I personally found shocking about Spock. He had a form of dyslexia that the Vulcans call L’tak Terai, and that Amanda helped Spock work past this learning disability, after seeing him not get the help he needed at the Vulcan Learning Center.

Despite assertions to the contrary, Burnham senses that Amanda knows where Spock is. She kept him in a shrine that shields telepathic communication. Does it also eliminate mind melds? I didn’t understand why that wouldn’t be the first alternative to help Spock. Maybe that was tried, but the lack of a mention took it down, but just a tad for me. It could have easily been dealt with in a line of dialog. It’s not like they couldn’t have fit it in the episode, since the episode was the shortest of the season.

We find Spock operating outside of his reality. He’s chanting 841947, the Vulcan First Doctrines of Logic, Alice in Wonderland, and not connected to anything or anyone around him.

Georgiou helps Burnham, but what strings does that help come with? And is she lying or telling the truth?

At Sarek’s insistence, Burnham takes Spock back to Section 31, where Leland tells her he will get the best care, then says that they don’t allow non-Section 31 personnel on board. Georgiou tells Burnham that Leland was going to extract his memories, and lets her escape. So, do you think she’s telling the truth, and if she is, what’s the angle? Only time will tell!

Some of Star Trek’s greatest episodes have involved time travel or have some element of time loops or distortions, and this one is no different. Like Tilly calls it, it’s a time blender, a place where the past, present, and future all exist at the same time. Get it? Time? This story had some of the trippiness you would expect, and it was great that it tied in elements like Mudd’s attempt to take the ship in S1E7 Magic to Make the Sanest Man Go Mad and Stamets’ ability to exist outside the regular time stream. This plot also involved the confrontational relationship between Tyler and Pike. It seems an understanding was reached, but I am not sure everything is resolved.

That probe reminded me of The Matrix!

They send out a probe, which ages 500 years and gets a big upgrade. It reminded me of the sentinels from The Matrix. I thought that was pretty cool!

You may not remember her name, but I have a feeling you will soon!

Airiam, that odd cyborg bridge officer, has been infected by the probes, as the three red lights would indicate. Where that story’s going is anyone’s guess. Could SHE be The Red Angel???

Burnham and Spock are heading for Talos IV. This is where Star Trek started! This is the planet Pike’s Enterprise goes to in the first TOS pilot episode, The Cage. That pilot was later repackaged to use in the TOS two-part episode The Menagerie. This is big!!! It will explain some things I had questions about from that period, and I can’t wait for us to find out more next week!

That’s it for Light and Shadows!

We both loved the episode, and we rated it the best so far! This episode was packed! So much happened and yet it’s the shortest episode of the season! We’ll be back in a week with our next episode. As always, your feedback is essential to this podcast! We’ll be having a short feedback deadline most weeks this season, due to scheduling issues. We’ll cover more feedback from S2E7 Light and Shadows, so do not hesitate to send in your feedback if you miss the deadline. For Star Trek: Discovery S2E8, which is titled If Memory Serves, the deadline to get in your feedback is Friday, March 8, 2019, at 6 PM Eastern/5 PM Central or 11 PM UTC.

You can submit feedback via the Feedback page, Facebook Group, Twitter, you can email startrekgsm at gmail dot com. Make sure to mention you’re calling The Star Trek Discovery Podcast when you call. I’m also podcasting on The Walking Dead. Because of this schedule, we are trying to get our episodes down to a more reasonable podcast length. To help with this, we’d like you to focus on a few key points from the episode, rather than discussing everything about the episode. If submitting a voicemail, please try to keep your calls to 4 minutes or less, with an absolute maximum of 5 minutes. We would like to keep our episodes under 2 hours! Please help with that!