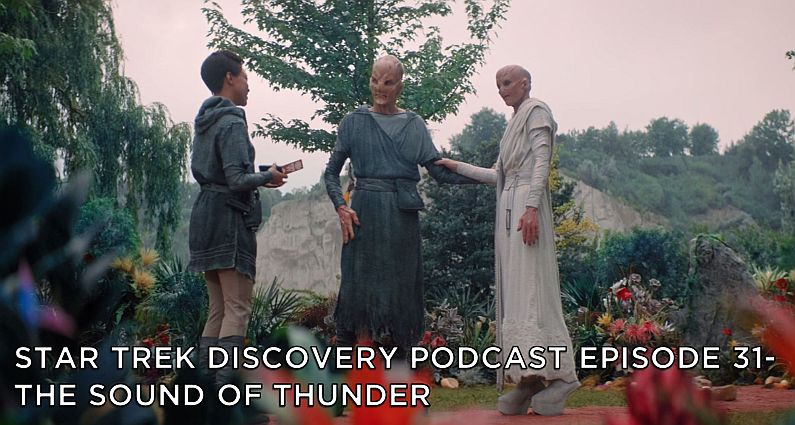 For episode 31 of The Star Trek Discovery Podcast, Ruthie and I discuss Season 2 Episode 6 of Star Trek: Discovery, which is titled, The Sound of Thunder. It was written by co-producers Bo Yeon Kim & Erika Lippoldt, who are said to be the creators of the new Section 31 series, and directed by Douglas Aarniokoski. You may have seen this referred to as The Sounds of Thunder, as all of the outlets had it as Sounds, but when it premiered, it was only a singular Sound. I’ve already seen several podcasts and YouTubers have it wrong. The Sound of Thunder is correct.

Discussion on The Sound of Thunder begins at 17:50…

We begin the podcast with feedback from previous episodes. Then, we finally get into this episode at 17 minutes 50 seconds in.

We have been blessed yet again with pics chosen by Fred from The Netherlands, including the cover image. We will show them throughout this blog post. To that end, SPOILER ALERT! If you haven’t watched The Sound of Thunder, you may want to stop reading here!

Another Big One for Saru…

A new signal appears over Kaminar, Saru’s homeworld. Saru hasn’t been back since he left, but since going through the vahar’ai, he has undergone certain changes. Saru doesn’t immediately leave the captain’s chair when Pike is summoned to the bridge, and later borders on being insubordinate when Pike doesn’t choose him for the away team. Burnham diffuses the moment by asking for him to accompany her on the surface.

Saru and Burnham meet up with the village priest, only to find out that it’s Saru’s sister, Siranna, who we met during the third Short Trek, The Brightest Star, which was shot at the same time as this episode.

We finally meet the Ba’ul! Sort of…

Contact with the Ba’ul doesn’t go very well, as they plan to kill the rest of the Kelpiens if Saru doesn’t surrender himself. Saru attempts to beam himself away before Burnham stops him.

Yes, we do meet them, but they are never clearly seen. Many commented that the Ba’ul reminded them of Armus, the lifeform from TNG’s Skin of Evil that killed Tasha Yar.

Another appearance of The Red Angel…

The Red Angel appears to Saru and Siranna on the Ba’ul ship. This time, we see more detail, as it appears to be a female in an advanced space suit.

We also see Culber in sickbay, as he gets used to his new body. This is an interesting story, and I wish we would have seen a little more of it this episode.

That’s it for The Sound of Thunder!

We both loved the episode, although I’d probably rate it the least favorite of the six so far. Don’t get me wrong. I still loved it, just not as much as some of the others. We’ll be back in a week with our next episode. As always, your feedback is essential to this podcast! We have a short feedback deadline most weeks this season, due to scheduling issues. We will cover more feedback from S2E6 The Sound of Thunder, so do not hesitate to send in your feedback if you miss the deadline. For Star Trek: Discovery S2E7, which is titled Light and Shadows, the deadline to get in your feedback is Friday, March 1, 2019, at 6 PM Eastern/5 PM Central or 11 PM UTC.

You can submit feedback via the feedback page, Facebook Group, Twitter, or you can email startrekgsm at gmail dot com. Make sure to mention you’re calling The Star Trek Discovery Podcast when you call. I’m also podcasting on The Walking Dead. Because of this schedule, we are trying to get our episodes down to a more reasonable podcast length. To help with this, we’d like you to focus on a few key points from the episode, rather than discussing everything about the episode. If submitting a voicemail, please try to keep your calls to 4 minutes or less, with an absolute maximum of 5 minutes. We would like to keep our episodes under 2 hours! Please help with that!