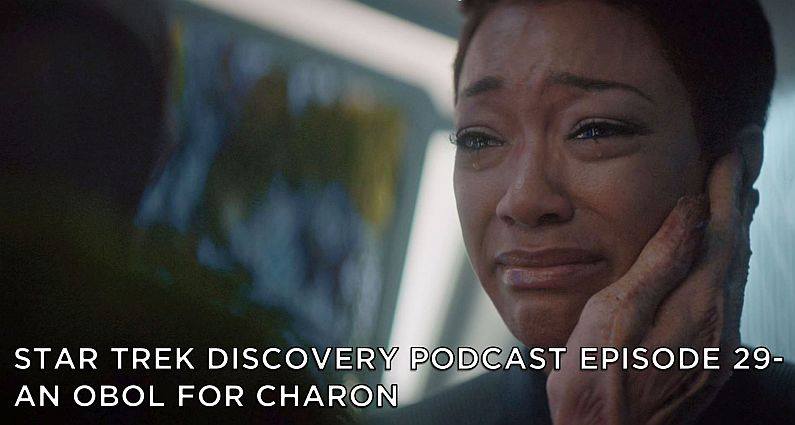 For episode 29 of The Star Trek Discovery Podcast, Ruthie is out sick, but I was able to get emergency guest co-host Wes Huntington from the Minnesota Star Trek Nerd Podcast to fill in, as we discuss Season 2 Episode 4 of Star Trek: Discovery, which is titled, An Obol for Charon. The teleplay was written by producer Alan McElroy (I got his name wrong during the recording – it’s Alan, not Adam) & co-executive producer Andrew Colville, the story was written by co-executive producer Jordon Nardino & showrunners Gretchen J. Berg & Aaron Harberts (who were still showrunners at the time). It was directed by Lee Rose. She also directed S1E5 Choose Your Pain.

A Tough One for Saru…

It was a tough episode for Commander Saru. It looked like we would be losing the first and only Kelpien in Starfleet during this episode, and they sold that death. I had myself questioning it. Could they kill him off? Would this be the right time to do that? I knew we see his sister Siranna in the last trailer, but I thought that maybe it could end up being a flashback or a hallucination before death. When it looked like he was going to die, though, he didn’t die. He evolved. One of his most problematic traits, his threat ganglia, are gone for good, and he feels like he’s never felt before.

I loved the Burnham/Saru scenes, showing that the bickering we had seen early on was the behavior of brother and sister. It took a tragedy for them both to admit it to each other, and to themselves. So, what will become of Saru, and the Kelpiens, who were being culled, seemingly as a part of a big lie. Time will tell.

I liked Saru’s quarters, by the way. Very idyllic.

A Tough One for Tilly…

This was also a tough episode for Tilly, and looks like the next one will be, too. The blob formerly seen as May has attached itself to Tilly, and isn’t going to easily let go. Tilly gets a drill to the head to facilitate communications, which had to hurt. At the end of the episode, we see Tilly’s been consumed by the blob. For what purpose, we cannot know.

Speaking of Tilly, this episode marks the return of Jett Reno, Tig Notaro’s character from the season premiere. I had predicted that Stamets and Reno would make a good combination, and I was right! There were some great insults, barbs and comic lines exchanged. I look forward to seeing her again, but WHO IS THE CHIEF ENGINEER, anyway??? With the spores in the air, mushrooms abound and make Stamets and Reno high. Very trippy!

Rebecca Romijn makes an appearance as the legendary Number One, from the TOS pilot, “The Cage” and the two-parter, “The Menagerie”. It was a short appearance and one that did not yield what many of us thought it would, including me: Her name. That said, it was a good performance by Romijn. We’re pretty sure we’ll be seeing her again, and if you believe me (Brian), we’ll see a lot more of her soon. By the way, you may recall that Number One was one of the people I thought might have taken command of the Discovery at the end of Season 1. The right ship, the wrong officer! 🙂 I speculate in this episode what Kurtzman and CBS might have planned, and those plans involve her (and some other crew we’ve either already seen or have been talking about all season long).

There are a few more tweaks to Star Trek canon in this episode, which we can appreciate! What? The holograms caused massive failures on the Enterprise? That’s it! Rip’em out!!! We also hear that the current Chief Engineer of the Enterprise, Louvier, is in love with his ship like another engineer of the Enterprise a few years later. We also learn that the entity downloaded 100,000 years of knowledge. Could the Federation still be unraveling those mysteries in the 24th Century? We also see Commander Nhan appear back on the Discovery. Could she end up becoming Chief of Security?

I made a few omissions during this podcast. Most of them I added back in post-production, but one that I didn’t was that I left off Spot the 47. Saru says to Burnham that life support is down to 47% in the science lab, at 23:26 of the episode.

That’s it for An Obol for Charon!

We’ll be back in a week with our next episode. As always, your feedback is essential to this podcast! We’ll be having a short feedback deadline most weeks this season, due to scheduling issues. We’ll cover more feedback from S2E4 An Obol for Charon, so do not hesitate to send in your feedback if you miss the deadline. For Star Trek: Discovery S2E5, which is titled Saints of Imperfection, the deadline to get in your feedback is Friday, February 15, 2019, at 6 PM Eastern/5 PM Central or 11 PM UTC. You can submit feedback via the Feedback page, Facebook Group, Twitter, or call the voicemail at (216) 236-5449 and leave us a message there. Make sure to mention you’re calling The Star Trek Discovery Podcast when you call.

I’m also podcasting on The Walking Dead. Because of this, we have to get our episodes down to a more reasonable podcast length. To help with this, we’d like you to focus on a few key points from the episode, rather than discussing everything about the episode. If submitting a voicemail, please try to keep your calls to 3 minutes or less, with an absolute maximum of 5 minutes. We would like to get our episodes back down under 90 minutes! Please help with that!