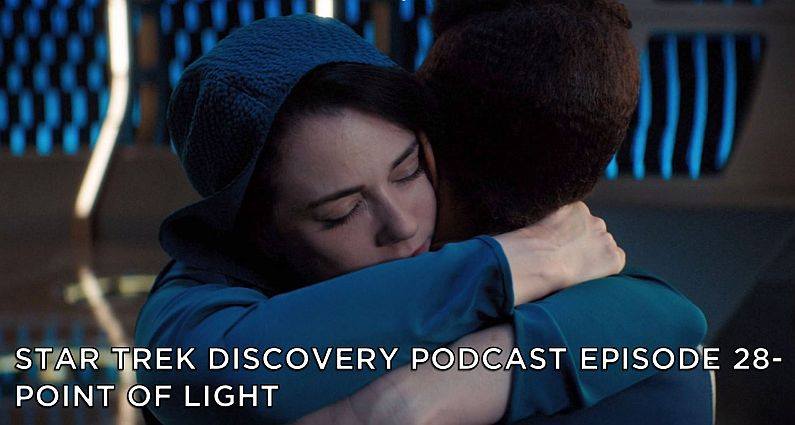 For this supersized episode 28 of The Star Trek Discovery Podcast, Ruthie and I discuss Season 2 Episode 3 of Star Trek: Discovery, which is titled, Point of Light. It was written by co-executive producer Andrew Colville (his first writing credit on Discovery, but he’s got a long list of shows he’s worked on) and directed by executive producer Olatunde Osunsanmi. Unfortunately, his name was misspelled in the credits. See for yourself.

The Search for Spock

The seven signals search reaches a bit of an impasse, but Discovery gets an unexpected visitor from Amanda, Spock and Burnham’s mother. She has stolen Spock’s medical records.

What did Burnham do to hurt Spock??? Amanda hears this and decides she must find Spock on her own. It can be interpreted a few ways how to take this point, but it’s a powerful moment.

The haunting of Tilly by May, which seemed to be a harmless thing in the last episode, has taken a turn to the strange and for the worse. May becomes more insistent and demanding. Tilly appears to lose it on the bridge at the worst time. I loved the sense of humor shown by Pike here, by the way. Mary Wiseman is great as usual in this scene.

Later, we see her confer with her best friend (and still roommate, it seems?) Burnham, who makes her realize she is not going insane. There’s some nice work, all the way around.

We see a pretty amazing scene with Stamets pulling May out of Tilly.

Back on the Klingon Homeworld…

We return to Qo’noS to find Chancellor L’Rell in a fight to keep her position from a challenge from Kol-Sha, leader of the House of Kor (where is Kor?) and father of the deceased General Kol. Torchbearer Tyler is still by her side, but his human side is causing issues for L’Rell.

We learn that L’Rell’s keeping a secret from Tyler. Before his transformation, L’Rell became pregnant with Tyler’s child. Tyler sees a “baby Voq”, as the child has that same translucent skin Voq had.

We see an interesting scene with Burnham having a “holographic Skype” session with Tyler. Here are some visuals.

Captain Georgiou is back, only she’s not a Captain anymore, and she’s not that Georgiou. Yes, it’s the former Emperor Georgiou! She’s “retired”, and a “Starfleet Security Consultant”. She makes a spectacular entrance, saving L’Rell and Tyler from certain death at the hands of Kol-Sha.

This episode serves as a kind of a back-door pilot for the new Section 31 show. We get a good look at the tech, uniforms and how they work behind the scenes.

There are a few tweaks for canon in this episode, which we can appreciate! The Klingons are growing hair again, and are building the D7 battlecruiser, the standard within the Klingon Empire for decades to come. Why does the Enterprise not seem to use holograms? Because Pike’s old fashioned! Dumb, yeah, but I loved it nonetheless. We don’t see Pike use holograms, and you can assume Kirk follows suit for either the same reason, the Enterprise doesn’t have them installed, or there’s a security issue that comes to light later.

That’s it for Point of Light!

We’ll be back in a week with our next episode. As always, your feedback is essential to this podcast! We’ll be having a short feedback deadline most weeks this season, due to scheduling issues. We’ll cover more feedback from S2E3 Point of Light, so do not hesitate to send in your feedback if you miss the deadline. For Star Trek: Discovery S2E4, which is titled An Obol for Charon, the deadline to get in your feedback is Friday, February 8, 2019, at 6 PM Eastern/5 PM Central or 11 PM UTC. You can submit feedback via the feedback page, Facebook Group, Twitter, or call the voicemail at (216) 236-5449 and leave us a message there. Make sure to mention you’re calling The Star Trek Discovery Podcast when you call.

Next week marks the first week where I’ll also be podcasting on The Walking Dead. Because of this, we have to get our episodes down to a more reasonable podcast length. To help with this, we’d like you to focus on a few key points from the episode, rather than discussing everything about the episode. If submitting a voicemail, please try to keep your calls to 3 minutes or less, with an absolute maximum of 5 minutes. We would like to get our episodes back down under 90 minutes! Please help with that!